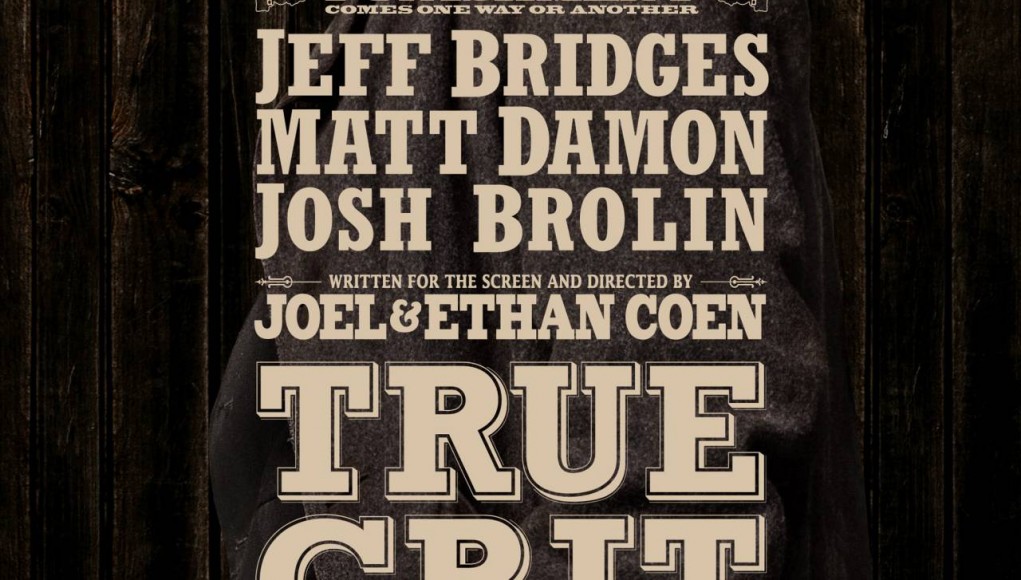 Maddie Ross has lost her father to the whiskey guided hands of Tom Chaney. She seeks justice by way of Rooster Cogburn, a rough U.S. Marshall whose said to have “true grit”. He is not afraid to kill, probably because it is the one thing he is good at. Accompanying them on their journey is LaBeouf (pronounced “LaBeef”), a Texas Ranger out to capture Chaney for his own purposes.

Together they will encounter death, violence and danger, and along the way Maddie will come to know herself and her own style of “grit”. That is the set-up for the Coen Brothers’ remake of the 1960’s classic True Grit, and with it they have made an authentic, red-blooded Western. The Coens restrain themselves in their dialogue and style, and present a film that is entirely homage yet characteristically their own. It is old-fashioned, just like Cogburn himself, and it is terrific entertainment, straight-forward in its execution and philosophy.

From the start, Maddie is strong-willed and intimidating. She is 14, but carries herself like a grown woman, negotiating the terms of her father’s death with tact and acumen. When she bargains with a local businessman over her father’s property, she reduces him to sweat and stammers.

She is surrounded by death from the start, and it would seem that is where her path will eventually lead her. Her teaming with Cogburn is not without coincidence. She learns of his salty demeanor and is attracted to his style of punishment. He is a vessel for her anger; she had rather shoot first and ask later. In the four years he has been with a badge, he has killed over 20 people. That is all she needs to know.

Cogburn is a U.S. Marshall because it would seem that it is the only thing he is good at. Having failed in business and marriage, carrying a gun is what he is best at doing. Jeff Bridges can disappear into any character he is given, especially when working with the Coens. Here he is angry, bitter and drunk, and Bridges nails the performance. He is sure to get an Oscar nomination, but this is not his year; it is Franco or Eisenberg’s.

Before teaming up with Cogburn, Maddie encounters LaBeouf, who brings with him a cocksure nature that masks his insecurity. Previously a soldier in the Civil War, he is tasked with finding Chaney after the assassination of a Texas senator. LaBeouf speaks big and confidently, relying on bureaucracy to justify his task, but really aspiring to prove himself.

If Maddie is on a quest for blood to avenge her father, she is also on a quest to prove herself worthy. LaBeouf is on the same journey, and Cogburn is their guide and tester. In their lives, retribution and violence are the determinants of a strong fortitude, as it is in most Westerns. In this world, you are measured by your level of “grit”.

What is interesting to note is the notion of justice and law in the film. There are Marshals and Rangers that are supposed to abide by a code, but in the vein of the Western, the code is stained with blood and gunpowder. Cogburn is fully introduced in a courtroom scene where he is forced to defend his violent actions. I am intrigued because in this world, a courtroom would not seem necessary (not if John Wayne were still around I suppose). It is a ruse masking the inevitable end that faces most assailants: death. I guess the court is just a nice formality that exists to place an official shine on the noose.

Cogburn and Co. do not offer that sort of luxury, and while LaBeouf aims to capture Chaney and transport him to Texas, chances are he had just kill him on the spot. There is a lot of killing in True Grit, and it surprised me the level of gore in a PG-13 film. Fingers are chopped off and brains are splattered across a wall. Further proof that the MPAA loves violence, but is terrified of sex or compassion. It is appropriate that a film like this is violent, but I am surprised by the level to which is allowed for the 13 year old crowd.

Matt Damon and Josh Brolin are good in their respective roles. Damon plays LaBeouf as trying and determined, but always aware of his badge and his presentation. Brolin is Chaney, a man who’s alluded to the entire film and only given short screen time to relish. He is a fool whose fallen on hard times; a criminal but only by necessity and anger. When we meet him, he’s taking orders from a local gang. Chaney strikes me as someone who’s taken orders his entire life, and his only way to distinguish himself is through crime. Brolin plays him well, and with surprising depth for such a short amount of time.

The true star of the film though is Hailee Steinfeld as young Maddie. This is her first full length film, and she not only holds her own with Bridges but outshines him in many instances. It is a joy seeing her use her smarts and will to navigate her way in the story, and I have a feeling that Steinfeld is going to continue doing great things with her career. She’s a major talent and gives the film its heart and compass.

It is sort of a surprise that this is a Coen Brothers film. Lacking their signature dialogue or philosophical musings, what we get is a straight-forward American Western. It is a sight to marvel, as Director of Photography Roger Deakins relishes the landscapes (as he did to a degree with No Country for Old Men) and Carter Burwell’s score gives life to the proceedings. Everything speaks to the filmmakers’ love for the genre, and they have taken their considerable skills and crafted a fine film.

When people look back at this version of True Grit, I do not think it will be remembered strictly as a Coen Brothers film, but rather as a love letter by two masters to a form they value so much.