Home Movie Reviews This is the End 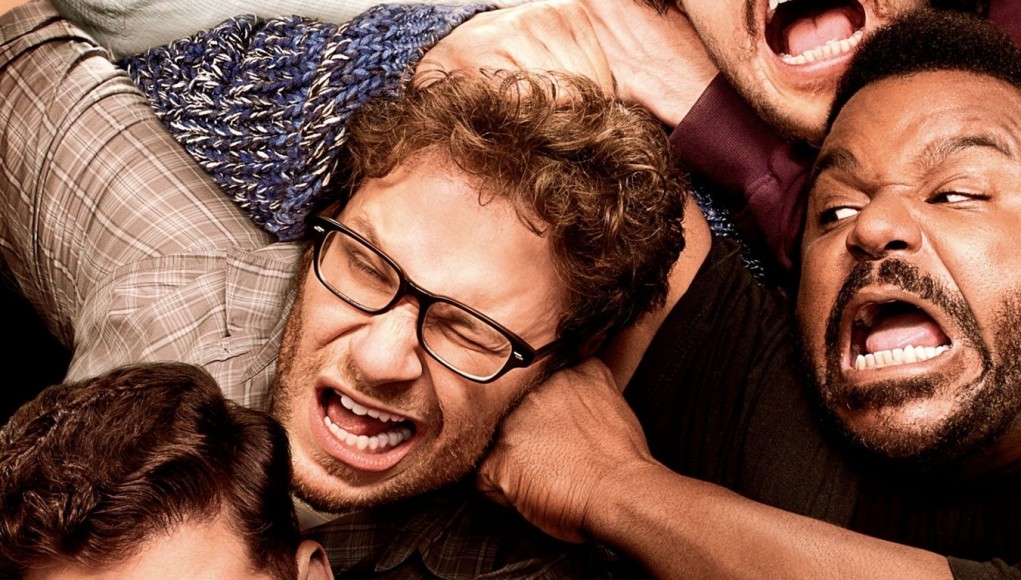 Imagine that the world around you is crumbling and you are stuck in a large home with some of America’s most recognizable faces. Food and water are scarce, drugs are plentiful, and a close fraternal bond is there to help each other survive the apocalypse. That is the premise of The is the End, where a sextet of modern comedy heroes, some of which have grown up together in film and television, wait out the end of the world.

Seth Rogen welcomes his best friend Jay Baruchel at the airport and the two partake in an afternoon of marijuana, 3D video games, and friendship at Seth’s bachelor pad. Despite Jay’s uncertainty about Seth’s West Coast life and friend, the two go to a party at James Franco’s home where dozens of the most recognizable comedy performers are partying in excess. When Seth and Jay drop by a local convenience store for some snacks, all hell breaks loose, literally. The two make it back to Franco’s home, only to see their dear friends, and America’s dear comedians and actors, enveloped by a bottomless sinkhole. Only Jay, Seth, James, Craig Robinson, Jonah Hill, and Danny McBride are left at Franco’s mansion.

This is the End is a postmodern playground from co-writers and co-directors Rogen and Evan Goldberg. The two found success as a team for their work on Superbad, which made Hill and Michael Cera, who also appears in the film, household names. Here, we see these celebrities thriving to exist inside a bubble as the world is crumbling around them. Luckily, this gaggle of likable and talented performers have an excellent synergy together, perfect for a relentless pace of jokes and gags from beginning to end.

The actors play hyper-fictionalized versions of themselves which perfectly supplant common perceptions of these performers. Michael Cera, who has a short existence in the film, causes trouble at Franco’s party by blowing coke into other guests’ faces, exerting misogynist gestures towards women, and is acting all-out obnoxious as he yells, “I’m America’s Sweetheart!” This self-awareness is supported by the Los Angeles societal bubble where these celebrities exist. They exhibit social anxieties even within A-list cliques, but are unsympathetic to the world around them.

When these six are forced to survive together at Franco’s fortress of concrete and artwork, the complex social structures their careers cast upon them become their bane and boon. The film focuses on the relationship between Seth and Jay, where the latter accuses the former of becoming a soulless Angeleno, and Jay is uncertain of his place among Seth’s friends. In reality, Baruchel does seem to be the odd man out when placed together with the other five; to the casual spectator he is a familiar face but an unknown or fleeting name, forced to deal with Seth’s more famous and successful friends to survive.

This is the End joins many apocalyptic comedies over the past couple of years, primarily fueled by the insistent radical and self-righteous religious organizations who foresee the end of the world on a monthly basis. Last year, Cabin in the Woods and Seeking a Friend for the End of the World were comedies which represented this anxiety. With today’s media present to capture all of the world’s most atrocious natural disasters, this type of tragedy has become a monthly event, and these films capture these anxieties with a satirical and farcical edge.

Along with the relentless humor, the film also features some original and inventive use of demons, both in concept and execution via CGI. Where many films rely on CGI, sometimes as the sole premise, This is the End only uses CGI to appropriately add what practical effects could not. The only uncertainty in the film is the handful of horror references that pass by without harm. In general, the filmmakers should be applauded for an original premise that is as inane as it comes, and satisfying to no end. I only wish that a film like this would exist with George Carlin, Richard Pryor, Mel Brooks, Gene Wilder, and Lenny Bruce instead.