Home Movie Reviews The Place Beyond the Pines 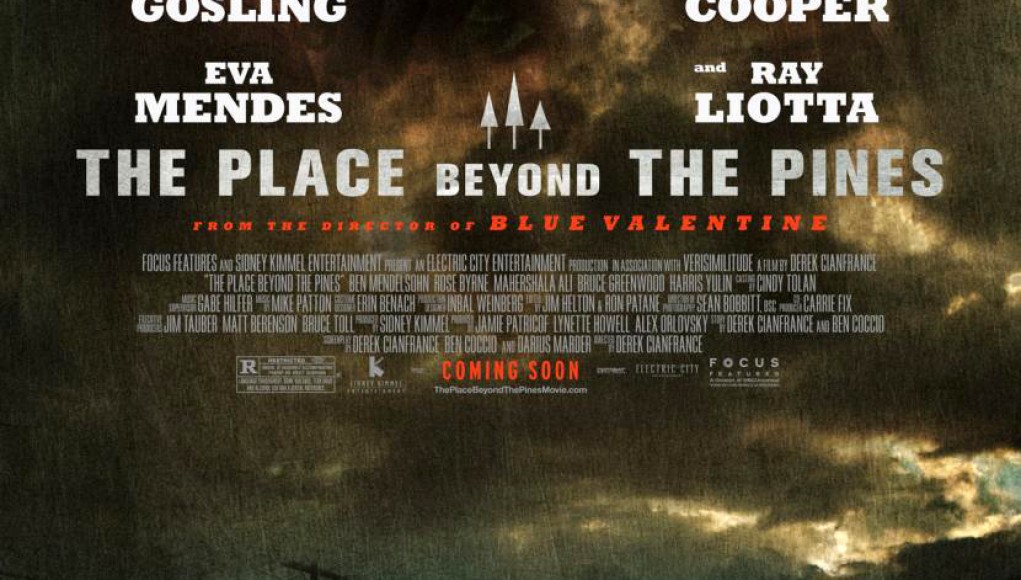 Predestination may force certain individuals to chase their supposed privileges or reject them entirely. In The Place Beyond the Pines, we see the catalysts and the outcomes of these polarities test the role of revenge on an intimate family feud. This melodramatic thriller is told in three parts, from the perspectives of two men and their genetic legacies. The film’s high-brow concept is only barely cohesive, struggling under the weight of its attempt to be a sprawling dramatic epic, but retains a sense of suspense while pursuing this character study.

Luke Glanton (Ryan Gosling) is a motorcycle stuntman with a traveling fair that has returned to Schenectady, New York. The year prior, he had struck up a brief encounter with Romina (Eva Mendes), which produced a son of which he was unaware. Certain to be a provider, Luke quits the fair, but struggles to make enough income at a body shop, provoking him to turn to bank robberies. Though two robberies go off without a hitch, the third one is botched and leads to another brief encounter, this time with Officer Avery Cross (Bradley Cooper).

The film begins by following behind Luke as he takes a long ceremonious walk to the dome in which he will ride his motorcycle with two other stuntmen within inches of their lives. They circle inside this dome at breathtaking speeds, an image that links itself to the city’s namesake, which is a homonym for synecdoche, a figure of speech where a part of something refers to its whole. This scene portrays life in Schenectady, New York in an isolated form, beyond the pines, where life is constantly circling itself in a sphere. The pines themselves make up a deep forest in which the main characters often go to escape for one reason or another. Schenectady is no paradise, but a mythic place as denoted by the title of the film, which is derived from a native Mohawk phrase.

Avery’s introduction in the film is haphazard, but so is the chase that acts as a catalyst to Avery and Luke’s brief meeting. The moment that would define Avery’s career is only briefly questioned regarding its lawfulness, but these questions remain within a single hospital room, and Avery will unanimously become regarded as a hero. At this moment, the film shifts into Avery’s perspective where the viewer witnesses his involvement in a scandalous corruption outfit in the ranks of his own precinct, as well as recovering from a bullet wound in his leg. Avery is used as a pawn by his superiors thanks to his clean cut record and medal of honor. He reluctantly sneaks evidence in and out of the station and witnesses to a forceful entry to Romina’s home to recover Luke’s hidden loot.

Fifteen years later, the film finally focuses on the perspectives of Luke and Avery’s sons, who have grown up, and have inadvertently become friends, even if it is for a brief moment, unaware of the links between their fathers. Now that their hormones are in full swing during their middle-teens, their genetic make-up and their individual privileges equate to predestination as they follow their fathers’ footsteps in recklessness.

These connected stories are forced to balance on a thin line between sincerity and over-the-top melodrama a la Douglas Sirk and the rebelliousness found in Nicholas Ray’s despondent male characters. The connections are apparent, but the moments in which these perspectives switch are abrupt, perhaps to portray the abruptness of life changes. The characters that dominate this film, Luke, Avery, and their sons, are all portrayed as strangers after they enter a heightened sense of a place in the world, or in the place beyond the pines. Luke acts on a guilt trip now that he knows he has a child, Avery is high on his heroism, and their sons struggle to find their place in high school.

Writer and Director Derek Cianfrance’s previous film, Blue Valentine tends to have many of the same themes, including absentee versus adoptive fatherhood. Linking these similar themes tends to be Gosling’s lead roles in both films, so much that they could just as easily be the same person. More so, Gosling has tended to find solace in intense, loner characters that live on the margins of society, such as in Drive. The film also boasts an appropriate and subtle musical score by Mike Patton, the frontman for many eclectic bands including Faith No More and Mr. Bungle.

The film ends in a cynical and cyclical nature, returning to the images in the first scene where Gosling’s character joins two men cycling around in a steel sphere. Is it predestination or is it Darwinian evolution? Do the characters in the film exist as a synecdoche themselves? The Place Beyond the Pines has a messy way to deal with themes of fatherhood, manhood, and destiny, but its presentation is worth the rocky journey from the margins to malice.