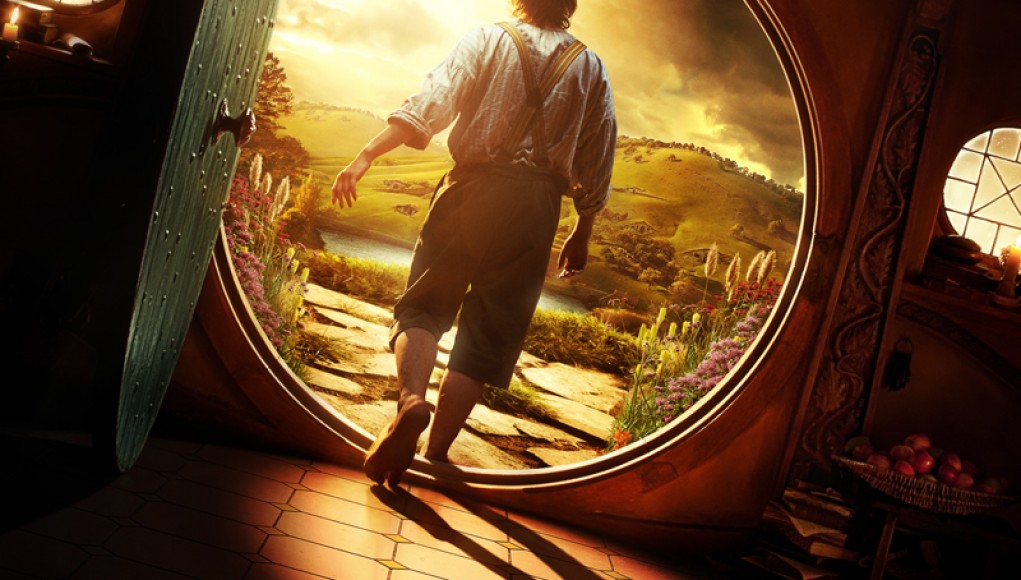 Almost nine years after The Return of the King provided the capstone to the cinematic adaptation of The Lord of the Rings and sweeping the 2003 Academy Awards, The Hobbit: An Unexpected Journey takes us back to Middle Earth. Although sluggish at first, this film tends to appropriately depict the lighter fare of J. R. R. Tolkien’s fantastical world when compared to the dark, evil intentions found in the sequel’s antagonists.

Just prior to his 111th birthday party, Bilbo Baggins (Ian Holm) reminisces about his grand journey some sixty years before, when Bilbo (Martin Freeman) gets an unexpected visit from Gandalf (Ian McKellen). Twelve Dwarfs arrive freeloading on Bilbo’s foodstuffs and ale before inviting Bilbo to join their quest to retake their city in the Lonely Mountain that was taken over by the dragon Smaug a generation prior. Although comfortable in the Shire, the reluctant Bilbo signs the contract, laceration warnings and all, and joins them  late the next morning.

Gandalf says it best, small acts of kindness trickle outward to become grand gestures.  Yet, it can also go the other way. A tiny drop of water creates ripples in a large ocean. Over time those ripples become waves, and those waves gain speed and size exponentially before flooding a shoreline with blunt force. The company’s quest to retake the Lonely Mountain begins a domino effect that puts into place what we experienced in The Lord of the Rings.

Bilbo is chosen by Gandalf because these small acts can come from anywhere, perhaps even a humble hobbit. The unexpected courage from a rather small being is the simple but wise sensibility that An Unexpected Journey and Tolkien’s worlds have portrayed. Bilbo’s pre-quest reluctance resurfaces again only to be thrown deeper into the side-missions and threats that occur, only to re-establish his commitment to the cause.

The dwarves had been forced into exile by a uncompromising force. Their small, isolated mountain and their plight of exile may resemble that of many communities exiled due to racial, religious, or ethnic prejudice. Even Bilbo, home-sick for his Hobbit hole with books and tea, understands that every simple being deserves a home, thus he continues on with the dwarves. Bilbo’s small acts, and seemingly small role in a grand attempt by the dwarves, is a passing thought in the expansive fantasy world and history of Middle Earth. Yet, An Unexpected Journey takes its time to expound on the necessary details this tale requires.

The film begins sluggishly, bridging the moments that set The Lord of the Rings film in motion and the reluctance of Bilbo agreeing to his invitation to join the dwarves. Tired eyes will awaken once the quest begins as the company experiences an unrelenting series of misadventures with trolls, orcs, goblins, and a self-exiled, bi-polar, and supernaturally addicted hobbit. The sluggish nature is more than likely due to Jackson and company including information and details found beyond the beloved novel. Appendices from The Lord of the Rings as well as many other books from Tolkien’s broad Middle Earth literature is included in this film, which may feel to be overwhelming to fans mostly knowledgeable of the original novel.

A live-action adaption of the The Hobbit itself was an uncertainly for many years. From director musical chairs to lawsuits, it has arrived in theaters with the same sense and style as Director Peter Jackson’s magnificent trilogy. Since Lord of the Rings was released prior to An Unexpected Journey, certain incidental moments of dramatic irony that are non-existent in Tolkien’s original works are too apparent here. This incidental irony gives the film, and even the wiser characters, a sense of self-awareness and false foreshadowing that is hard to ignore. Then again, this was the same issue that latter Star Wars trilogy had to overcome, and failed to do so.

In the meantime, The Hobbit takes advantage of the technological advancements that occurred during the decade between the two trilogies. The Hobbit was captured in 3D and at 48 frames per second. For almost a century, 24fps has been the standard of film with synchronized sound. 3D has had its share of discussions on whether the format is worthy, but the 48fps format is thought to decrease the issues that arose with 3D exhibition. Technically, 48fps should provide smoother motion, just like 3D should make a world more dynamic. These technological advancements are still unnecessary, as Jackson has again taken us back to Middle Earth with a multi-dimensional world with characters to love and a massive quest to endure.

3D aside, the CGI elements that were revolutionary for their time a decade ago are just a tad more smoother than before and but equally as apparent and out of place. Frodo’s small size compared to the trolls that that hold him up look so silly. Then again, The Hobbit is indeed whimsical than the crude evil in Lord of the Rings.

Sir Ian McKellen returns as the venerable Gandalf the Grey, complete with his quirk and love of fireworks and weed. Cate Blanchet, Hugo Weaving, Christopher Lee, and even Elijah Wood, among others, have returned to their seminal roles. Andy Serkis, the go-to-guy for motion capture performance, has returned to perform as the malnourished and waif-like soul of Gollum. Serkis’ unrelenting emotion of wretchedness and worry permeates through all the artificiality that is imposed over his motion capture performance.

Lastly, Martin Freeman, who has become the humble face of humanity in Anglo-Saxon culture (i.e. The Hitchhiker’s Guide to the Universe and The Office (UK)), has taken on another extraordinary role, that of Bilbo Baggins. Freeman brings the punctuality, perk, and the English tradition of dry, practical humor to the role. His resemblance to Elijah Wood’s Frodo is just close enough to see a hereditary link between Frodo and Bilbo.

It is difficult to write about An Unexpected Journey when early in the morning of its Friday release, when a person let bullets loose at a score of school children in Connecticut. Unlike The Dark Knight Rises shooting in Aurora, Colorado, An Unexpected Journey has nothing to do with the shooting. However, if we can remember Gandalf’s words about how simple acts of kindness dispel darkness, perhaps we can create ripples of hope and courage that grow exponentially and prevent egregious acts of violence. That is indeed why both Bilbo and Frodo have been tapped to save Middle Earth. They were unexpected, seemingly marginal creatures, who overcome uncanny odds to bring people home and end suffering.