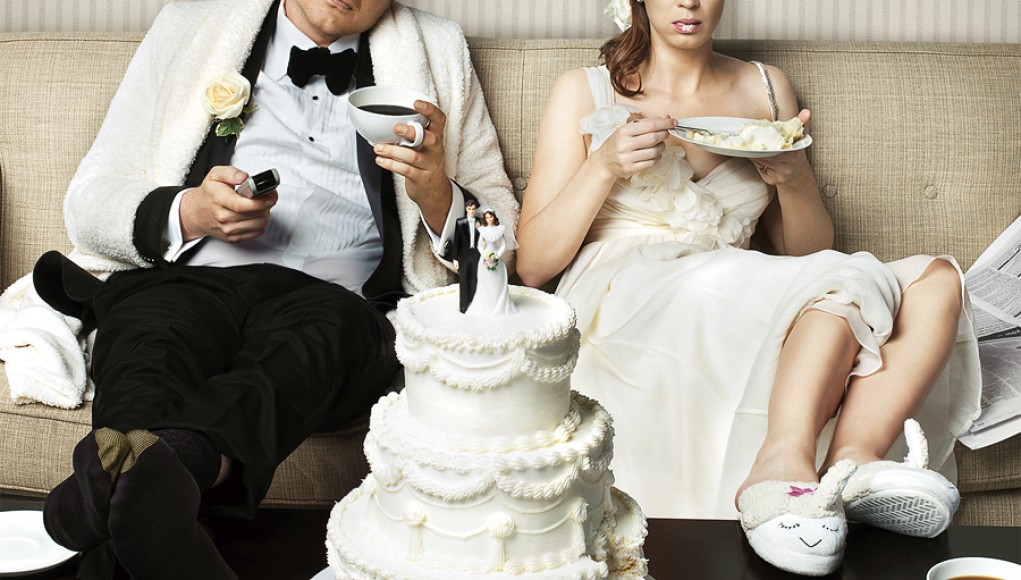 Romantic comedies are a dime-a-dozen and Judd Apatow films are starting to follow suit. Yet, Apatow does employ filmmakers who can merge his gross-out comedies with their own specific style, and none have done better job than the team of Jason Segel and Nicholas Stoller. Fresh off their fantastic reboot of The Muppets, and returning to their adult-oriented Forgetting Sarah Marshall, the two have returned with The Five Year Engagement, a romantic comedy that explores role reversals while capitalizing on the predictable rom-com format with the Stoller-Segel wit and charm.

After Tom Solomon (Jason Segel) proposes to Violet Barnes (Emily Blunt), Violet is accepted to a doctoral position at the University of Michigan and the two decide to post-pone their wedding. Tom quits his high-end sous chef job in San Francisco and the two move to the mitt-shaped state. While Violet enjoys her work at the university under the tutelage of Winton Childs (Rhys Ifans), Tom has difficulty assimilating into the new surroundings and taking a back seat in the relationship. As two have different experiences with the change, the looming wedding continues to be out of reach.

Many romantic comedies end with weddings, but films such as the The Hangover portray the difficulties in getting to that special moment. The Five Year Engagement continues the trend while placing a variety of struggles in place. Violet comes from a Catholic family while Tom is Jewish, and their respective parents want to ensure that their religion is represented with priority. Tom is a talented chef on the verge of breaking out, and Violet is a nervous wreck after she is rejected from Berkeley and before she is accepted to UM. These interests, and self-interests clash with each other as grandparents begin to die off and a divide seems between Tom and Violent seems to be growing.

The film does have a level of predictability, but the original and charming material gives the film enough flavor to work from beginning to end. It becomes  apparent what Professor Childs’ intentions are early in the film, and the film’s conclusion is painfully inevitable, but satisfactory, of course. But The Five Year Engagement does not rely on the predictable, but tests the waters on the reversed roles. Tom becomes the the keeper of the house and works as a deli line-preparer, as well as taking a huge financial hit. Save for Mr. Mom, this portrayal of role reversal is rarely seen in American films, but the situation is accurate.

Violet suggests for her class to perform an experiment that re-configures the influential experiment giving the children a choice between eating one marshmellow immediately, or waiting patiently to enjoy a second marshmellow. Instead, in a room filled with adults, they offer a box of stale doughnuts that at a later time will be replaced with a fresh box. The doughnut experiment is a clever metaphor for Tom and Violet’s relationship. The two could have chosen to enjoy getting married right away, or wait patiently for the perfect wedding that every little girl dreams of. However, the metaphor would have been more effective if it was not later acknowledged by the Segel’s character. The subtlety of the metaphor would have worked far better.

The team of Stoller and Segel have again nailed another highly accessible film that deals with the uncertainty of love. Their work in Forgetting Sarah Marshall pairs well with The Five Year Engagement, albeit, this film is more charming and lacks the same amount of vulgarities. The two have also included Segel’s muppet influence seen in Forgetting Sarah Marshall as well as their passion project/reboot of The Muppets. Towards the end of the film, Suzie’s daughter insists that her and Violet talk like Elmo and the Cookie Monster while they have their introspective argument about their decisions of love.

Segel and Blunt are perfect together in the film. As are Alison Brie and Chris Platt who have excellent chemistry in the film, their goofy nature adds a perfect contrast the stumbling relationship between Tom and Violet. Even Brie’s fake British accent is on point. Additional supporting work from Kevin Hart, Chris Parnell, and Mindy Kaling fill scenes with the color and character to drive the film home. The Five Year Engagement is not a high-priority release, but the film is subtle and charming. The film does run long, but there is a shortage of criticism of any particular scene that I could suggest to be shortened or expunged. Then again, five years is a long time, and it perhaps the run-time fits the film’s progression.