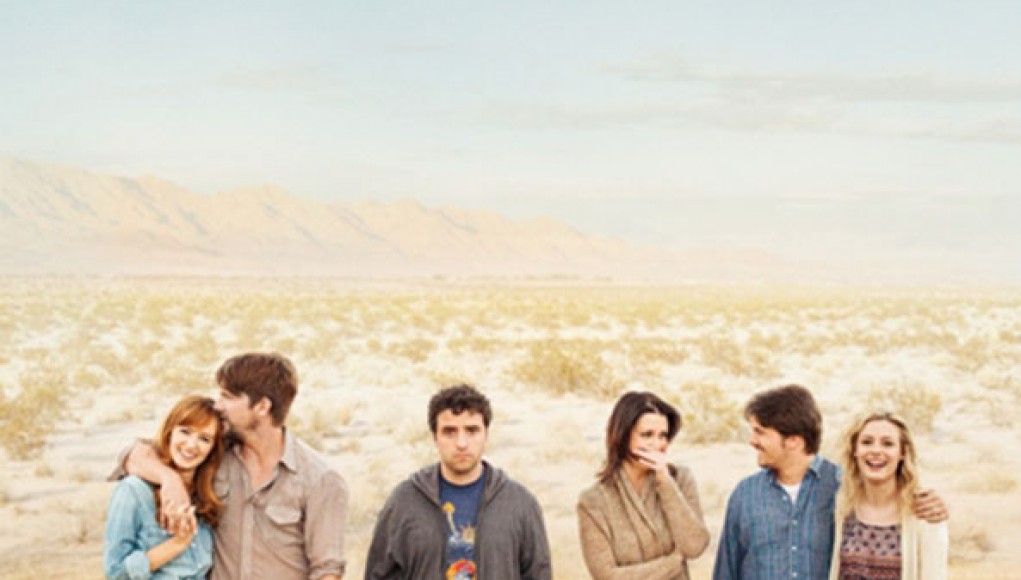 Even with the ridiculously awkward premise, Teddy Bears is not nearly as original as one might think. A spat of indies about sexual revolution among groups of friends have littered film festivals and Netflix queues for years. Yet, somehow this film tends to remain funny with quippy dialogue and solemn self-discovery among everyone in the group.

Three couples who are best of friends escape to rent a secluded home in Joshua Tree for a weekend getaway and to celebrate Andrew’s (David Krumholtz) birthday. Andrew‘s mother died recently from cancer, and everyone is understandably supportive of Andrew’s grief. That is until Andrew, with the reluctance of his girlfriend Hannah (Melanie Lynskey), requests to have sex with Hannah and the female partners of the other couples all at the same time. The ludicrous question immediately divides the group, but Andrew is serious about his wish, as he believes sexual therapy will help him cope.

Boyfriend/Girlfriend Dave and Zoe (David Krumholtz and Ahna O’Reilly respectively) are relatively happy, although Zoe has yet to answer Dave’s marriage proposal, a struggle exacerbated by Andrew’s sexual therapy suggestion. Emily (Gillian Jacobs) and Owen (Jason Ritter) are showing signs of cracks in their relationship while Emily considers the request as she truly values her friendship with Andrew.

Teddy Bears (The Big Ask) is a dark comedy that remains relatively light-hearted thanks to the incredibly present awkwardness brought about by Andrew’s bold request. Captured against the desert mountain backdrop, the film has a setting where the characters have no choice but to face a difficult question. However, the film does not focus solely on its central question, but instead the political fallout between the couples and further questioning into Andrew’s psyche are at the forefront.

The central conflict is set aside for two converging subplots including a lost dog who Andrew befriends and secretly locks the dog in a guest house, keeping its whereabouts from its worried owner, Old Man Carl (Ned Beatty). Then there is Rich (French Stewart), the owner of the house the gang is renting, who has recently split from his alcoholic wife Lori (Dale Dickey, who always seems to play drug-addicted street folk). These two plots represent the unconditional love that Andrew truly needs, the hoarding that he should overcome, and the degradation of romance that sometimes comes naturally.

Teddy Bears is held up by the chemistry between the characters. David Krumholz, who has the face you’ve seen in dozens of movies but you’ll never remember which films or his name, plays the depressed kook Andrew. He’s comfortably overweight and borderline grotesque, a physical outsider when compared to the more attractive couples. Jacobs takes a back seat to her role in Community, as does Ritter, who usually tends to relish in hammy over-acting.  The couples intermingle well but struggle to develop the true meaning of Andrew’s sexual aspirations with the women of their tight-knit group.

Then there are the secondary characters played by recognizable character actors who are masters of their craft. French Stewart, Dale Dickey, and Ned Beatty all have small, heart-breaking roles that affect the dynamics of the friends, and particularly Andrew’s approach. They all inadvertently reveal the epiphanies that he expected to reach through love-making with other people.

The home the group is renting is surrounded by Teddy Bear cacti, which gets its name from the soft appearance of their densely populated spines. Perhaps that is a metaphor for Andrew, cuddly in appearance, striking in close contact. Andrew’s proposal to his friends has jabbed dozens of sharp needles into everyone, and the result is a balance of humor and introspective soul-searching for everyone involved.