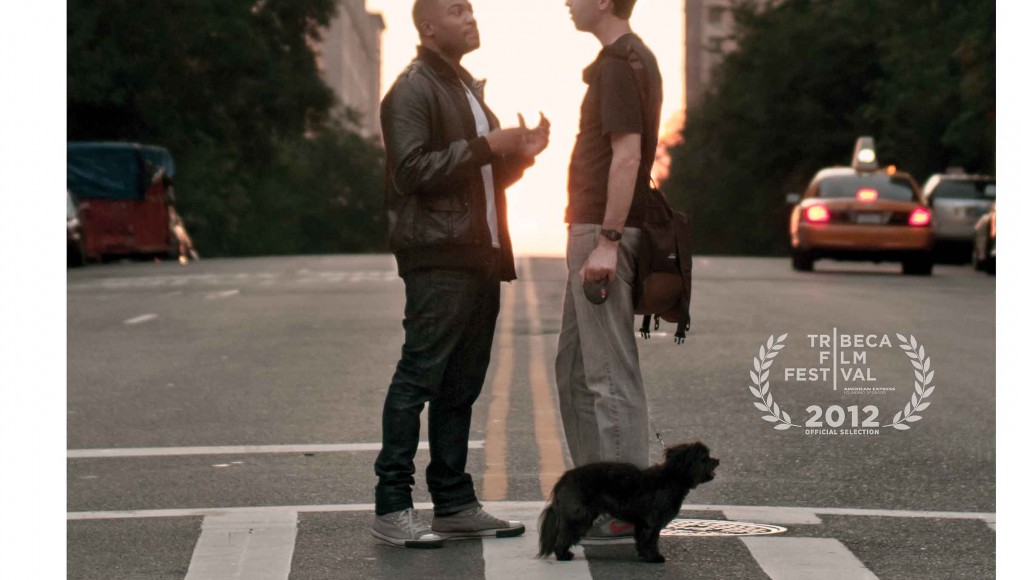 Directors have dreams and producers have products. One slaves over the same story for month or years to express a grand idea. The other counts pennies to deliver a concise product to earn a profit. Everyone else is in between, contracted to perform duties that will ultimately assist the director and producer, as a team and individually. Supporting Characters explores those people in control of a film once it leaves the director’s hands and before the producer delivers it for exhibition. Also, how the post-production process parallels our own lives.

Nick (Alec Karpovsky) and Darryl (Tarik Lowe) are an editing team contracted to fix an independent film with low-scoring screening tests. Nick and his fiancée Amy (Sophia Takal) are seemingly doing well, but Darryl and his girlfriend Liana (Melonie Diaz) are constantly at odds. When Nick becomes friends with Jaime (Arielle Kebbel), the lead of the film he is trying to save, he questions his relationship with Amy and considers taking a new editing gig, sans his long-time partner.

Supporting Characters itself is an independent film, and a surprisingly unconventional and charming comedy that is rhythmic and unpredictable. Rarely do we see life from the perspective of an editor in narrative film (although Blow Out comes to mind), but here we witness a team of editors scraping mere frames and excising entire scenes to create narrative clarity for a film in crisis. Editing and other post-production processes create a narrative cohesion to random moments captured over and over again. Nick and Darryl fight with the other filmmakers, cast, and even themselves to cut shots, even the good ones, in order to save the film and retain their value as editors.

Not only are these two trying to salvage and fine-tune the film they have been hired to edit, they are also attempting to the save to their relationships. Nick’s fiancée has a job that she is indifferent to and Nick enjoys a certain prestige as an independent film editor. Darryl, on the other hand, is constantly concerned over minute details of his own girlfriend’s life, and this personal issue exists in parallel with his editing decisions.

Supporting Characters exposes the creative differences in collaborative occupations, as well as the differences that exist in romantic relationships, which are also supposed to be collaborative. One of the most telling scenes, which includes one of the most satisfying laughs, is when the director of the film, played impeccably by Kevin Corrigan, accuses Nick and Darryl of stealing his film. Towards the end of the scene the Director of Photography arrives to make the same accusation towards the director. This scene exemplifies the decades old auteur debate; whose signature is truly attached to a film? The truth of the matter is that in such a collaborative project, many people invest themselves, from the principal directors and producers down to the cast and production assistants, and such auteur labels are passed down by the eyes of the beholder.

There have been many backstage film dramas and comedies, where the magic of the screen is revealed to be a series of misadventures of people struggling to make their dreams come true. Dreams in Supporting Characters appear to be non-existent, as most of the characters make rather rational decisions with that affect the film in question. What could have been a bland, over-wrought romantic comedy, Supporting Characters creates a charming and unpredictable narrative with realistic portrayal of the struggles of saving a film in its post-production phase.

This is also a film where the performers shine, particularly the leads played by Alex Karpovsky (of Girls fame) and Tarik Love. Together they reach a nirvana with comedic timing and realistic portrayals of the travails of independent filmmaking in New York. The rest of the cast is also amicable, including the above mentioned Corrigan, and even a cameo by Lena Dunham. In a time when artifice rules the screen and studios invest millions of dollars into tentpole franchises, Supporting Characters is a refreshing romantic comedy that explores the romanticism of filmmaking and the uncertainty of love.