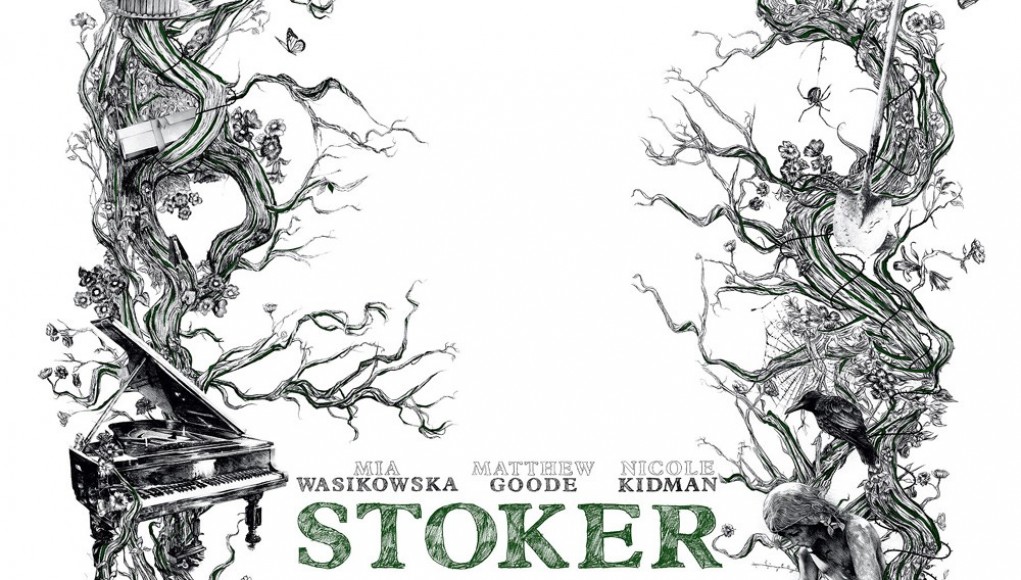 Psychological thrillers are becoming rarer in an age where tentpole films dominate cinemas and account for the largest slice of the pie. That is why Hollywood tends to look across the Atlantic, or this time, across the Pacific to find talented filmmakers who can offer alternative fare. Stoker features the English-language debut of Park Chan-wook, one of the most celebrated South Korean directors. Like his unconventional films in his home country, Chan-wook offers something that is progressive even if it faithfully utilizes the characteristics of a select couple of American classics.

India Stoker (Mia Masikowska) and her mother Evelyn (Nicole Kidman) are mourning the loss of their patriarch who died unexpectedly. Yet, when Uncle Charlie (Mathew Goode) arrives to console the family, his appearance divides them. Evelyn welcomes him, family friend Mrs. McGarrick (Phyllis Somerville) is worried, but India is unsure since she never knew she had an uncle in the first place. Rumors surrounding Charlie and Evelyn pervade around town so much that India is subjected to harassment at school. When housekeepers and others disappear without a trace, India’s uncertainty with Charlie grows as his visit becomes more permanent.

Stoker is a modern Gothic tale that crosses between Shadow of a Doubt and Chinatown. Where the themes and characteristics of these two American classics augment the notion of a perfect family when there is an underlying layer of doom. Uncle Charlie is also the name of the main antagonist in Hitchcock’s classic, and his entrance into the family is similar. Charlie eventually wiggles his way further into the family and slowly snakes his way into Evelyn’s sexual graces. Evelyn shares a name with the female lead in Chinatown, a character who was raped by her father, which in turn is an allegory for the rape of the land that surrounded Los Angeles.

India is a teenager at that crossroads where she is developing a sexual interest but retains a semblance of innocence. She wears longer skirts, but the dominant color of all her attire is white. Her hair is long and straight with a flat sheen. She is Wednesday Adams without the camp or the fantastic. Flashbacks reveal that she had a playful relationship with her father (Dermot Mulroney), with birthday gifts not given but hidden like Easter eggs. Their lively relationship that is contrasted with disciplined hunting outings where India learns to wield a rifle and use it at the precise moment. Charlie on the other hand is charming, well-groomed, and by all the feminine accounts in the film, handsome. He is empathetic and willing to learn new things. Yet there is something that draws India to him and away from him, and this conflict is one the most riveting aspects.

To enhance the Gothic and peculiar nature of the film, there are some unusual cinematography choices. One shot features India and Uncle Charlie talking on the stairs in a two-shot with an unorthodox amount of headroom above them. This shot forces the two characters’ heads towards the bottom of the frame, as if they were rocks that fell to the bottom of a lake. However, it also puts them at the same level, which refers to the first time the two have a conversation. Charlie standing at the top of the staircase and verbally recognizing that the perspective will alter their perceptions of power, with India having less since she is at the foot of the stairs.

Stoker is one of the three films English-language films directed by South Korean directors in 2013. This unprecedented moment, The South Korean Invasion as I choose to call it, is a zenith for South Korean culture, as Hollywood has invited three prominent directors to practice on American soil. Director Park Chan-wook has made some of the most prominent and unconventional thriller and horror films in the last two decades including Oldboy and Thirst. Stoker is a perfect example of an unconventional suspense-thriller: Gothic, dark, and unconventional.

While Stoker is not as violent or bloodletting as Chan-wook’s earlier films, it remains subtle and advanced when set against the current American film production landscape. Yet, Chan-wook is not attempting to out-do his most bombastic films, he is planting the seeds for more clout further on, like Kim Jee-woon with The Last Stand. Stoker is a step in the right direction, melding classic American cinema and South Korean New Wave for something that is somewhere in between.