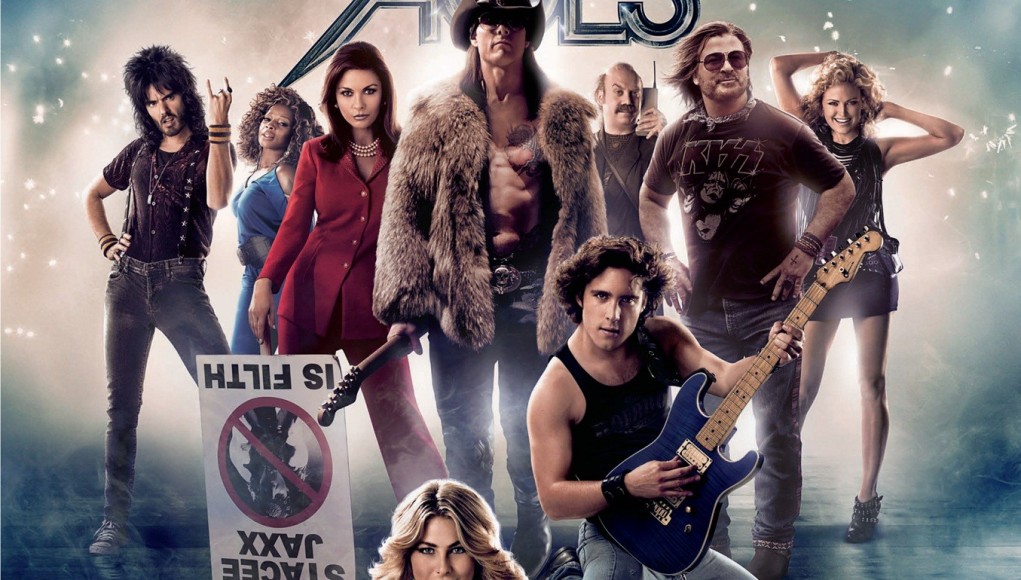 There are many musical styles that have waxed and waned through the years, Disco and Hair Metal are the famous examples. While films like Last Days of Disco use the style to represent the rise and fall of the excessive, Rock of Ages wants to revel in the atrocious music that excessive, over-the-top, and never sincere. Based off the hit Broadway musical, this film includes an ensemble cast to populate the film’s attempt to place this music on a pedestal as if it never fell off.

Sherrie (Julianne Hough) arrives to Los Angeles on a bus from Tulsa and is instantly mugged over her vinyl records. Drew (Diego Boneta) witnesses Sherrie’s misfortune and invites her to work at The Bourbon Room. Club owner Dennis (Alec Baldwin) and his assistant Lonny (Russell Brand) have secured the band Arsenal’s last show as the frontman Stacee Jaxx (Tom Cruise) has chosen to go solo. After the support band cancels, Sherrie suggests for Drew to debut his new music to critical acclaim. Meanwhile, the unfaithful Mayor Mike Whitmore (Bryan Cranston) and his wife Patricia (Catherine Zeta-Jones) has a personal and religious vendetta against The Bourbon Room and aims to take it down.

Rock of Ages is an insincere attempt to cater to new and old crowds with music that was left behind once the 1990s took over. For some reason, many still hold on to 80s hair metal and the excessiveness that it brought very dearly. I should disclose that I am a metal fan, and well versed in 80s metal, but have avoided much of the music this film spotlights. Yet, Rock of Ages uses many modern trends to sample the broadest amount of classic songs as possible. This includes mash-ups which pose two songs together, along with several medleys. However, if you pay close attention, you will notice that many of these songs easily sound the same.

Stacee Jaxx represents many famous frontmen of the era, but none as clearly as Axl Rose. His demeanor, his nihilist outlook, abuse of women, and even his lack of punctuality when hitting the stage is an accurate representation of the Guns N’ Roses singer. The culture war between Patricia Whitmore and The Bourbon Room mirrors the clash that existed in the 1980s, where religious conservatism grew during the Regan era. However, it exists in a rather different form today, giving this subplot more substance in today’s climate.

Let us not forget that the music the film is spotlighting becomes over shadowed by the Grunge onslaught of the 1990s. The trend of excessiveness, drugs, drinking, and egregious hair styles were deemed insincere by a new audience who saw the down-to-earth tunes from a variety of Seattle bands had more contemporary clout. Almost over night hundreds of loved bands were replaced by political correctness and musicians who looked like they walked from the street to the stage rather than dressing up and applying make-up. It was the wake-up call that these musicians and fans needed; it was the morning hangover after a decade-long party.

Featuring an ensemble cast—especially a few that talents who typically would not attach themselves to something this shallow (Cruise, Baldwin)—Rock of Agesmashes many younger and established stars. In fact, Cruise’s age is pefect for his role. His aging lines double as the lines of the tired, sore, over-worked, under-slept, and more or less, burned out rock stat lifestyle. Leads Hough and Deigo have the baby faces and wide-eyes that acts as the audience’s perspective of this time and place. Cranston and Zeta-Jones accurately portray the representations the many hypocritical, sexually repressed religious and conservative leaders who debated the wholesomeness of the music, a la Jerry Falwell and the Bakkers. Paul Giamatti slithers as the sleazy snake that chokes The Bourbon Room’s profits, and promises riches for Jaxx and Drew by stripping them of their credentials.

Although based on a popular musical, Rock of Ages is another egregious attempt to target the nostalgia of the time, lifting up an era and style of heavy metal that many have been happy to have left behind. It is camp in that it tries to take an already over-the-top topic and making it overtly melodramatic and excessive. Like this era, the film staggers along for far too long, and I was waiting for that last chord to hit. Instead, it lingered for too long like it was assaulted by flammable hair spray, and I’ve regretted the experience ever since. It is worrisome that Rock of Ages may give impresisonable children and teenagers the wrong idea that the music in this film is indicative of all heavy metal music from the 1980s, when it is merely the most accessible, and most vomit inducing.