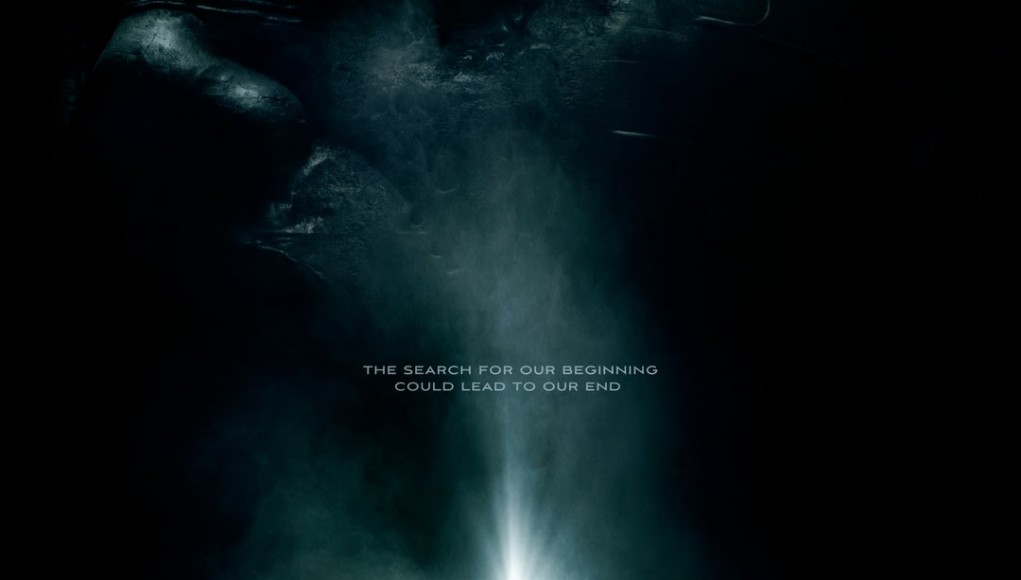 The current trend of sequels, prequels, reboots, and other films that capitalize (and exploit) franchises continues. While some films have failed miserably, such as Battleship and Alice in Wonderland, there are some films that have fared well such as The Muppets and Men In Black 3. Prometheus is Ridley Scott’s return to the universe of Alien, but is designed to stand as a preliminary prequel to the franchise. In the meantime, Prometheus is an innovative, revisionist science-fiction film that utilizes the academic criticism of the original franchise to support and bolster a new one.

In prehistoric times, a human-like being has traveled to Earth and drinks a black liquid that disintegrates its body into the ocea; its DNA proliferates and evolves. In 2089, the romantically linked Elizabeth Shaw (Noomi Rapace) and Charlie Holloway (Logan Marshall-Green) discover another ancient drawing depicting humans pointing to a series of stars. They team-up with Peter Weyland (Guy Pearce) and his Weyland Corporation to travel to a distant moon with a sun not too dissimilar to ours on the spaceship Prometheus. Years later, they arrive and exit the spaceship to explore a suspicious structure. Exhibition supervisor Meredith Vickers (Charlize Theron) warns Shaw and Holloway that they are not to make contact with the supposed Engineers.

Prometheus explores a variety of humanistic fears, timeless questions, as well as balancing the creator versus evolution debate, and smartly walking a thin line between both. Humans have an inherent desire to explore and conquer. When the Engineers, as Shaw and Holloway call them, first enter earth, they are explorers. Even after tens of millions of years, the inherent exploratory gene thrives as Shaw and Holloway discover a forgotten cave, in fact, they’ve discovered many. This exploratory desire is scientific; Shaw specifically states she wants to know where her species comes from. Merely seeing and leaving the distant moon, as Vickers commands, is not the scientific agenda that Shaw has in mind.

The film eventually has two opposing antagonists. One is thought to be a be a friend, and as the exposition shows, a precursor to the human species. The other, a common pest and parasite that that evolves and destroys our species from the inside out. Parasites and disease are two factors that have continuously been one of the most threatening agents in human history, but as we see in Alien, and now Prometheus, these issues become a galactic threat.

David (Michael Fassbender) is an android that accompanies the team, and has an agenda beyond any of the other crew members. Although he is obedient towards Peter Weyland, he exhibits many of the same symptoms and actions found in many science fiction films, where the robots and androids act against the prosperity of their human masters. This includes HAL9000 and even Moon‘s GERTY. David explains early on that he is designed to look and appear as close to a human as possible to prevent human crew members from having a reaction to David’s Otherness. The suspicion of David in Prometheus comes from the original franchise as Ash attempted to attack Ripley in the original Alien, prompting for Ripley to continuously hold a discriminatory grudge against  androids. It is also a theme that has carried over from Ridley Scott’s other classic science fiction film, the 1982 Blade Runner, and many science fiction stories in general.

Prometheus is clever film that is masterfully told and directed by Scott. The exposition with the Engineers is a smart way to appease creationists and Darwinists in a chicken or egg debate that the film continuously considers and never solves, at least in this film. The film does an excellent job in not relying on the Alien franchise, and creates a world that is introduced without confusion, with simple dialogue, and without repeating itself. The special effects and CGI are integrated well and do not suffer from the over-zealous low-frequency oscillations and loudness found in action films such as Transformers. The interactions between the characters are meaningful and deliberate, and stereotypical characters are minimal. There are some moments where characters have minimal clear or sensical intentions, or even have a poor understanding of how to escape from a spaceship crashing on top of them (perpendicular, you idiots), but these minor issues do not hinder the greater themes.

The performances will help Alien fans forget how the franchise lost its way with its sequels and its crossovers with Predator. Noomi Rapace’s feminist-punk stature from the original Swedish adaptation of The Girl with the Dragon Tattoo and other Millennium Trilogy films has been traded for a more ideal scientific romanticism in the tradition of Sigourney Weaver’s Ripley. Charlize Theron portrays a character who is ready to take her father’s reign of the company, and she pulls it off with a cold demeanor not terribly different from her recent role in Snow White and the Huntsman. However, it is Michael Fassbender’s android that steals the show. He exhibits the calculated nature of an android whose loyalty and allegiance is ambiguous and inconclusive.

Prometheus is one of the more ambitious summer films, and its ambition lies in its intelligence and thoughtfully crafted story that lightly uses its parent franchise, and should augment the franchise’s potential Alien prequel that is supposedly dependent on the success of this film. The film has instant replay value and the clout to be an excellent inclusion into the science fiction cannon. Prometheus is an ancient Greek mythic Titan that favored invention and discovery, and was eventually punished by Zeus. The film’s title and the spaceship’s name accurately represents the mythical figure’s tradition of scientific discovery for intelligence and unintended consequences of that quest. Not only do the protagonists in this film continue to seek this tradition, the film itself seeks to provide a cerebral experience for spectators, and provoke other action and sci-fi filmmakers to boost their game, since Prometheus has saved the summer season from complete intellectual destruction.

If you want to see some of the other films by Ridley Scott, you can visit www.lovefilm.com to find out which films you can stream and watch online. There are lots of films to choose from, and you can search for them via several different ways including by the director.