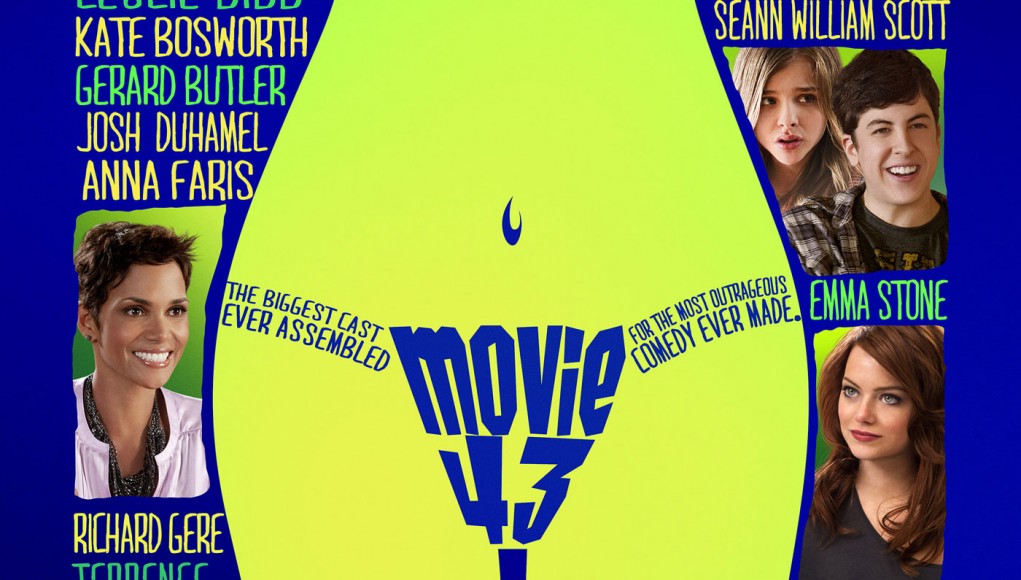 Movie 43 is a post-modern anthology of ill-connected juvenile short films. Certainly far from being art, the film is specifically designed to be a fun experience, particularly if maintaining attention is a difficulty.

Charlie Wessler (Denis Quaid) and his assistant (Charlie Saxton) have scored a pitch meeting with Griffin (Greg Kinnear) a production executive at large studio. Charlie attempts to pitch scatological film ideas to Griffin, with each idea played out in full as a short film.

Movie 43 is most definitely a post-modern cobbling together of short films with only a sliver of a story arc that connects the films together. This is very much in the tradition of films such as Kentucky Fried Movie, where there is a bombardment of absurdist sketches. However, a central plot revolving an out-of-work filmmaker at a pitch meeting is inserted between each sketch, but every time the film returns to this central plot, it spirals out of control.

Using primarily adolescent sexual and scatological humor to provoke any sort of laughs, but no chuckles, Movie 43 is artless. The film is perfect for the attention starved generation looking for thrills around each corner. In that case, Movie 43 fills a void for a small audience that needs constant assurance they will never be left to think for themselves.

Each of the film’s segments are written, directed, and performed by an entirely different set of filmmakers, making this film an anthology of absurd, meaningless short films that can only provoke sparse smiles, if that. Despite any negative attitudes, it should be noted that this film is certainly something different, especially released in a month that is a notorious dumping ground for undesirable studio products. Rarely are films such as Movie 43 ever produced, and the filmmakers and talents deserve acknowledgement for at least attempting something different. In this case, failure can still be considered progress.

Despite the few worthy laughs, the film flies by quickly, running akin to a midnight shorts program at a film festival. Its inherent design targets a demographic that may find the silly humor affable with assistance from cannabis. Then again, if you look hard enough, a real stretch if you will, the film can be seen as a farce about the trials of being on either side of a pitch meeting: The desperation to make a sale, and the boredom of hearing thoughtless high-concept mashups.

The Movie 43 experience is also dependent on your region. Supposedly, the United Kingdom release does not have the central “Pitch” narrative that connects each short film. Instead, there is a narrative where kids endlessly pursue the most banned movie in existence. This Clue like practice, where your theatrical experience is dependent on your region, points towards a bloated home video release, and debates about which version are abound to become a post-theatrical conversation.

Although the number of familiar faces is exceed several dozen, there are several surprising cameos by acclaimed talents such as Common, Halle Berry, and Terrance Howard. Those are strange names to see attached to film that relies on deliberately politically incorrect and scatological humor. No matter the material, the cast looks like they are having fun, and that appears to be the central theme of the film. In that case, Movie 43 meets its obligation. Whether the film exceeds that intention that is a debate I am not interested in.