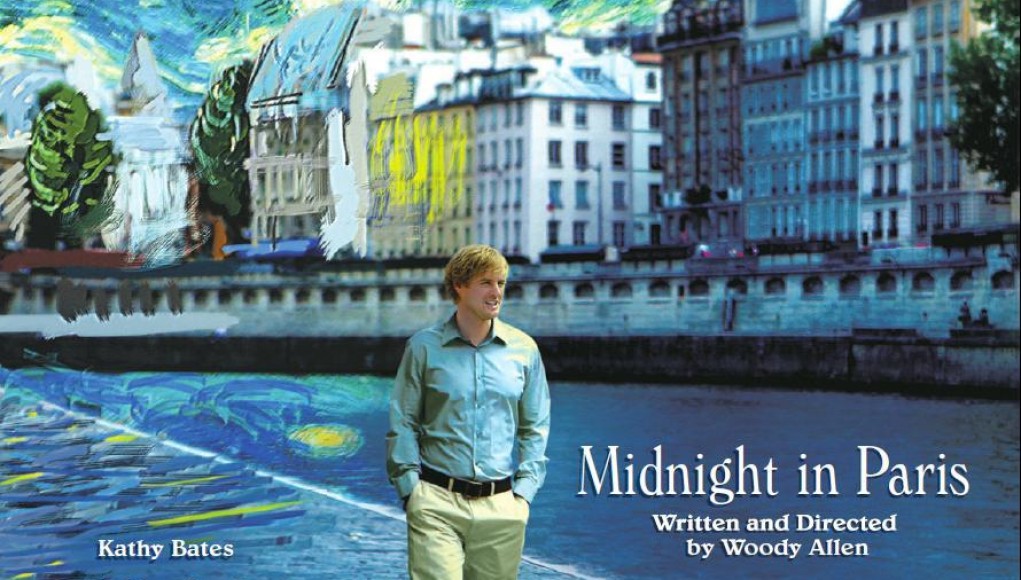 There are a lot of movies you can love when you are young in a way you can never muster again. Woody Allen’s Sleeper is one of those for me. Miles Monroe, played by Allen, has been revived late in the 22nd century after a cryonic preservation of 200 years. In Allen’s world, the future has the same problem as the present: It’s populated by the unimaginative, the ludicrous, and the reflexively fascistic. The soulless forces of social order are a terror, but Allen makes the self-important oppositional leader almost as bad. Sleeper’s vision of society as alternately absurd and misguided is what sticks with me even now, years after my last viewing.

Not surprisingly, that also describes Allen’s latest, Midnight in Paris, which turns out to be much more substantial than Sleeper, and better than pretty much any Allen comedy of the past several years.

The setup, in a nutshell: On a visit to Paris with his fiancée, Gil (Owen Wilson) finds himself lost in Paris late one evening, when, at the stroke of midnight, an antique car full of partiers pulls up. They insist he join them, and the party they deliver him to is literally located in the Paris of the 1920s. Over the course of several trips to the past through this same mechanism, Gil meets Hemingway, the Fitzgeralds, Picasso, and a whole run of who was who in the arts at the time.

As A.O. Scott and Roger Ebert have pointed out in their reviews, Allen wisely chooses not to get into the details of how Gil steps back in time. The simple rules — Gil will be in a particular spot and bells will toll midnight and he’ll be picked up by car — are set forth with blessedly little exposition, so Allen can just riff on the idea later without much explanation. That’s all for the good, because extensive explanatory passages are the constant bane of self-conscious movies where the details of time travel are spelled out, usually resulting in lots of hurried exposition and garbled scientific nonsense.

That’s not the problem here, but ironically Allen has an entirely different exposition problem, one that isn’t really that common. It’s the way that average people in his movies are always making explicit the dynamics of relationships and personal dilemmas, often in an artless or forced way that almost reads like subtextual subtitling. The trailer for Melinda and Melinda (posted below) offers some decent examples, like the line where the beleaguered dinner-party host complains, “I’m running out of obsequious banter!” Other writers would manage to demonstrate the idea by having the actors actually, you know, act, maybe by sputtering in front of the guests or awkwardly fumbling for things to say. If I hadn’t seen this kind of dialogue in so many of Allen’s films, I’d think he was trying to label that one character a self-conscious type, but so many of his creations talk that way that Allen must be writing them all with the same stilted voice. That’s not to say there aren’t great lines in all of his movies, but what comes in between can be awfully mediocre.

I suppose this kind of thing is off-putting because real life rarely finds people making these kinds of dramatic analytical statements about their own personalities; most people aren’t as neurotic, expressive, and articulate as Allen. Sometimes this is funny and charming, as in Annie Hall, but more often, especially in the past ten years, it’s felt blunt. “What do you want?” Melinda is asked. “I want to want to live,” she says. Another character tells Melinda to focus on “something real, not more unrealistic pipe dreams.” Perhaps it’s just the takes Allen chooses that sink these words, since unconvincing dialogue can be delivered expertly and Allen’s films have nothing if not gifted actors. Whatever the reason, though, these lines come across as inelegant at best and painfully literal at worst.

(I’m really hesitant to talk about filmmakers and “trends” in their work extrapolated from two or three movies, but Allen cranks them out year after year, often with similar themes and, if it even needs to be said, featuring protagonists remarkably similar to the Woody Allen persona.)

For the most part, though, Midnight in Paris doesn’t have that problem, and watching it I occasionally spent a moment wondering why. It might be as simple as the fact that the historical characters can’t be self-conscious because they have established personalities, ones that Allen mocks expertly. Hemingway, for one, plays perfectly as the kind of self-important baboon that Allen loves poking fun at — the famous author can’t be a neurotic spouting exposition because Hemingway already has a well-known manner of expression. As for Gil, the plot keeps the guy moving fast enough to avoid saying anything as obvious as “I’m confused because I’m traveling through time and this is making me think about romanticism as a worldview!” The Paris of the ‘20s has too many celebrated artists to impersonate for there to be enough time for that kind of awkwardness.

Owen Wilson, who often comes across as something of a surfer dude, might have played the perfect target of Allen’s sharper writing if he had been cast in the role of a more impractical character, one without a sense of his own absurdity, maybe a stoner or hippie. (Allen is a fan of the romantic but also the eminently reasonable and workable.) In comedies like Shanghai Noon, Wilson has been something more, though, giving off a hapless but fundamentally decent vibe, often suggesting a character incapable of real machismo or pretension, a description that would work well for many of Allen’s protagonists. That’s probably why Wilson is perfect here, projecting both his own inherent charm and Allen’s cockeyed view of the vain and idiotic.

There’s another reason I can think of that Midnight in Paris works so well. It is, as far as I can remember, one of the more purposeful of Allen’s movies, in that it is the investigation of a particular question that is formulated without being too insistent: To what degree should we follow the dictates of romanticism, with the value it places on sweeping emotion? The posing of this particular question isn’t maybe ideal, since, as in many of Allen’s movies, it’s being considered by people who have the wherewithal to fund sweeping emotion more than adequately. But movies don’t often even have a question that relevant to pose, and rarely do they do so with this much entertainment.