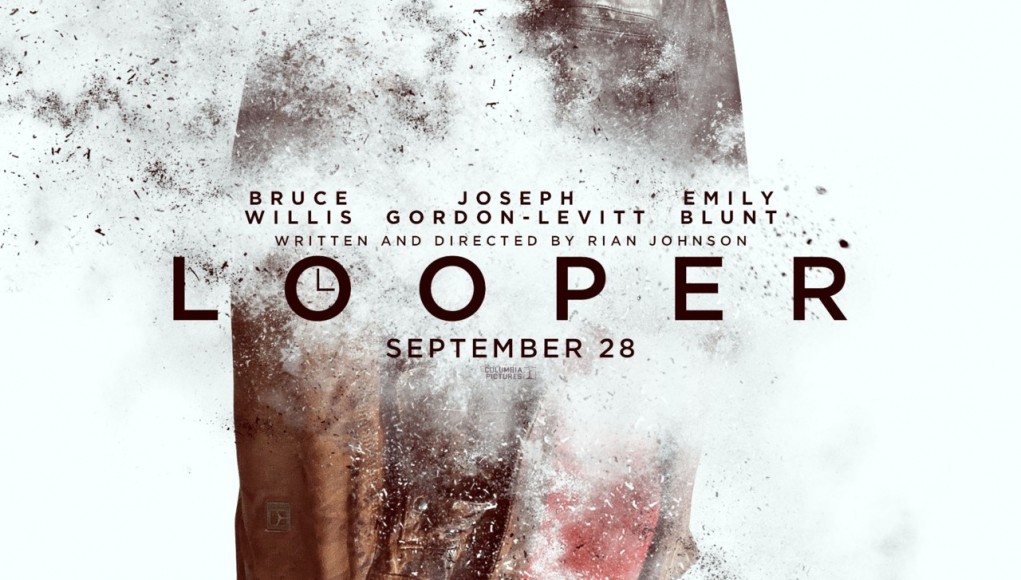 If you had a choice to murder an infamous dictator long before they became the villainous person that he or she became, would you do it? Looper does not just consider this question, it wades in it. With sympathetic character motivations in a strictly composed science fiction action-thriller, we have one of the most inventive and satisfying films in some time in the tradition of The Terminator and Primer.

In 2044, Joe (Joseph Gordon-Levitt) is a Looper, a drug-addicted assassin who kills a gang’s enemies from the future (2070s) to be disposed so that they never existed in the first place. It is a simple operating procedure. A Looper is given a time when a hooded person appears out of nowhere, and is shot within less than a second of appearing out of thin air. It is a lucrative business, but when a Looper’s service is no longer necessary, their elder self is sent back from the future for them to kill, effectively known as “closing the loop.” After a fellow Looper (Paul Dano) allows his elder self to escape, Joe sees the repercussions of this event. When his own elder self, sans hood, appears before him (Bruce Wills) during an assassination, Joe’s confusion and awe causes him to hesitate.

Essentially, in 2074, a man known as The Rainmaker is closing loops left and right. It is also the year that Elder Joe has been captured by his employers to begin closing the loop, but a freak causality in his capture creates a catalyst for Elder Joe to seek revenge across time. Back in 2044, Elder Joe has escaped and has explained to his younger self his motivation: To exterminate the young child that would become The Rainmaker, and eventually save the accidental casualty in 2074.

Looper explores the possibilities of events, and although time travel and supernatural powers exist in this world, the narrative does not rely on these elements too much. Taking place 2044, a tenth of the population had developed an early form of telekinesis, but most have only been able to use their powers as much as levitating a coin in their hand. Now that both Joe and Elder Joe are on the lamb from the gang they once belonged to, Joe both hides out at in a cane field owned by a mother (Emily Blunt) with her son Cid. The latter happens to be one of Elder Joe’s targets, and has an explosive anger management problem.

Looper is one of the few sci-fi action films that has a tremendous amount of material, none of which is repetitive, boring, or confusing. Writer/Director Rian Johnson, who made an immediate impression with his 2006 film Brick, which also featured Gordon-Levitt. Johnson has crafted a suspenseful and inventive story, and much more inventive than Inception. The film is so tightly composed, both in cinematography and in story, it is a pleasure to watch.

While time travel and telekinesis are important aspects to the film’s plot, it does not lean on these elements, and instead focuses more on the characters and their conflicts, like a great science fiction narrative should. Looper does not rely on confusion or action to progress, although it does have its shoot ‘em up moments. There are a half-dozen important characters with sensible motivations. Sure, there is some wildly imaginative science fiction elements, but with so many characters out to prove themselves or destroy others, we have the most essential part of the film hoisted up: character development. Not only is the development of these characters important, it a more sympathetic towards their individual conflicts.

When we see how Cid factors into the film, we can consider his unseen elder self in 2074. At five years old, we are witness to his power, but we only hear of his domination in the future, we never see it. We have heard how certain violent dictators resented their treatment when they were younger, creating the impulse  to redirect their aggression in atrocious ways.

The film’s freshness is also supported by Gordon-Levitt’s ability to be unrecognizable thanks to the prosthetics used to make him look more like Willis at a younger age. Even though there is no resemblance between Wills and a made-up Gordon-Levitt, the prosthetics do allow Gordon-Levitt to disappear entirely, fooling me the entire time.

Like Johnson’s Brick, Looper utilizes film noir sensibility with concise, speedy dialogue and a rather dark theme. The special effects augment the reality and exist plausibly in what is essentially an implausible future. While yes it is implausible, belief is suspended enough to enter the world without question and without any hoods, just like Elder Joe. Looper is so self-containing, fresh, and inventive, only one thing could ruin it: a sequel. A griping narrative from start to finish, it has more plot and narrative in two hours than most multi-film franchises have across their entire series.