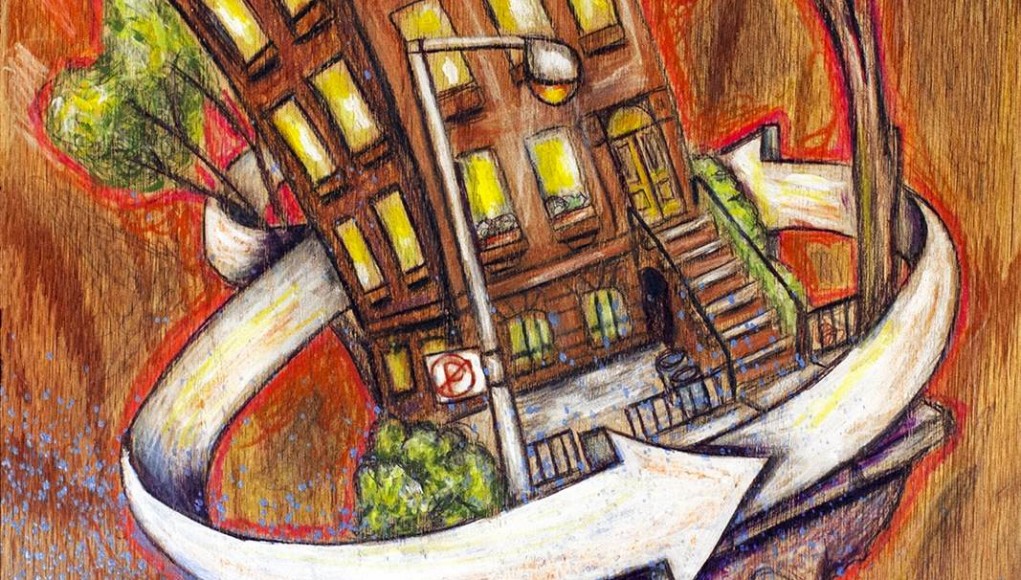 Leaving Circadia portrays extended adolescence no differently than what we’ve seen before with a pacing and style that doesn’t take any chances. This romantic comedy strives to bring home the point of pursuing American dreams, but the film fails to see past its own hypocritical plasticity as it is just as predictable and light-hearted as any other date-night American rom-com.

Tom (Evan Mathew Weinstein) is a lackadaisical superintendent hovering around his 30s, bides his time sketching fliers for local businesses and getting stoned. The responsible and career-minded Collette (Larisa Polonsky) moves into one of the units and despite her and Tom’s different habits, they sparks a romance. The newly divorced, wealthy, tea-drinking, a former Wall Street type Davis (Regi Huc) has moved into the penthouse of the building, and he too has taken a liking to Collette. Tom is beholden to his boss, Nat (Joseph R. Gannascoli), who’s becoming increasingly frustrated with Tom’s slacker mentality.

One of Tom’s lowest possible priorities is adjusting away from his own circadian rhythm of life composed of half-hearted superintendent work, day-dream doodles, and weekend benders in Atlantic City. Tom admits that he’s under duress until more successful people begin to surround him.

His 30-something crisis and habitual loafing is in direct opposition to Davis, who is instantly annoyed by Tom’s lack of professionalism as a super. Davis is easily annoyed but neither reactionary nor judgmental, but his divorce has left a sour taste in his mouth and a chip on his shoulder, even though the yoga seems to be helping. In the same vein, Tom and Collette should also be incompatible, with Collette struggling as a real estate agent. But movie magic says that opposites attract when it comes to romance.

There are few real negative comments to give Leaving Circadia other than its everyday-ness. Adequate and traditional would be the words that describe the film’s commonplace style. Believable but average acting, ordinary cinematography, and optimally placed montages that are just short enough are the heart of this movie. The jokes are also of decent quality, they just fail to provoke audible laughter.

Leaving Circadia is the perfect example of the institutional mode of representation and includes everything a conventional film has: Decent lighting, good-looking performers, a decent score or soundtrack. But what is missing that certain je ne sais quoi that lifts films out of independent obscurity and a few regional film festival appearances into something noteworthy. The lack of urgency and Tom’s work ethic might have seeped into star, writer, and director Evan Mathew Weinstein’s mise-en-scene.

Weinstein has fashioned an investment-safe showcase of his own acting, which indeed has moments of brilliance in line with early Dustin Hoffman, and his co-stars all suite their characters just fine. Joseph R. Gannascoli of The Sopranos fame offers a familiar face, perhaps to keep just a few spectators awake or to simply break the monotony of the film’s plasticity. Since Tom fights to break from his own monotony and chase his artistic endeavors, Weinstein should learn from his leading man and do the same.