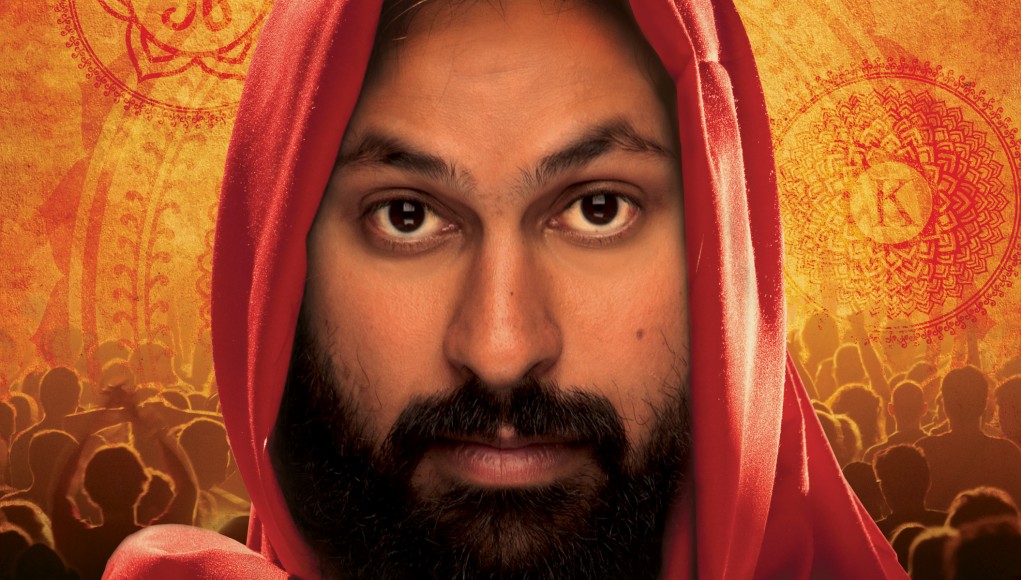 Evangelists dominate Sunday morning services in their mega-churches, yoga gurus instruct scantily-clad men and women to contort their bodies in heated rooms, and self-help authors coach their students to create image boards. This is just a small sample of people who lead religious or spiritual lessons to millions of men and women looking for their place in the world, or even their own bodies. Spiritual guidance, in all its many forms, is a vast niche of people looking for something other than materialism, and the documentary Kumaré explores the role of spiritual leaders and how they gain a devoted following through performance art.

Documentarian Vikram Gandhi grew up in New Jersey an Indian-American intrigued by, but not entirely convinced of, the religious traditions of his heritage. To test world-wide interest on following gurus, priests, or other forms of spiritual leaders, Vikram transforms himself into Kumaré, a self-proclaimed guru from India who has arrived in the United States to teach unsuspecting followers his own brand philosophical and spiritual awakening. Along with two assistants, Kumaré seduces fourteen disciples, each with their own troubled lives, to teach arbitrary chants and yoga poses in order to explore the role of spiritual leadership.

Kumaré himself is a stereotypical hodge-podge of symbols that make up Eastern gurus as seen in media: long hair, a full-grown beard, an Indian accent, and a staff. He has his followers recite non-sensical chants, perform childish yoga positions, and has one-on-one generic connections with people looking for something bigger in their lives. He is invited to visit other yoga studios, retreats, and off-grid farming communities to spread his oxymoronic messages. Essentially, Vikram has concocted an expected vision of how Westerners think an Eastern guru looks and acts. Even “wiser” skeptics find Kumaré to be the real deal.

Vikram, or shall I say Kumaré, has a sense of humor in this experiment, or shall I say, spiritual awakening. The primary ideal of Kumaré’s teaching is that illusion is truth, an oxymoron that encapsulates the arbitrary nature of the experiment and pokes fun at Eastern religion in general. One of the most humorous moments has Kumaré drawing a phallic image on the forehead of one man who has a PhD in Philosophy, not unlike the irreverent drawings of a bored middle school child. Kumaré even recites the word “penis” in his chant performs this “ancient” ritual.

What is not funny is that there are sensitive and emotionally desperate men and women who are truly looking for complex answers to a smorgasbord of internal and external conflicts. Priests, Rabbis, Gurus, etc, have many roles in their communities. They conduct century-old traditions, perform life events, and act as therapists and mentors when necessary. These men and women are looking for that single moment of brilliance to help them cope or at least become one with the environments that they can and cannot control. Kumaré never really provides answers, just circumlocutionary phrases that repeat his oxymoronic teachings. While Kumaré embraces these troubled people with his made-up spirituality, it places the role of religious and spiritual leaders into perspective, raising questions of exploitation.

Kumaré can be seen as a companion piece to Bill Maher’s Religulous, a documentary that also examined and mocked monotheistic religions in particular. What Kumaré truly presents is that there are men and women who are struggling with their lives and are looking for existential answers. One of the catalysts of Vikram’s experiment was seeing the acceptance of Eastern Yoga in the West, which would become a billion dollar industry. The very thing which he had been skeptical of, and which he had attempted to escape for years, had popped up in store fronts around his own neighborhood. This questions the role of capitalism in religion and spirituality; how do men and women who lead earn monetary income? While Kumaré never sells anything, at least on screen, evangelists, yoga instructors, and the like, create religious and spiritual brands with merchandise voraciously consumed by followers.

Of course Kumaré is aware from the very beginning that there must be a time when the experiment must be unveiled. In the meantime, the fourteen followers have found that Kumaré’s teachings to have a positive influence in their lives and see him has the mentor they were looking for all along. Vikram’s experiment features two lessons: that spirituality is arbitrary, and that humans can derive meaning from its arbitrary existence.