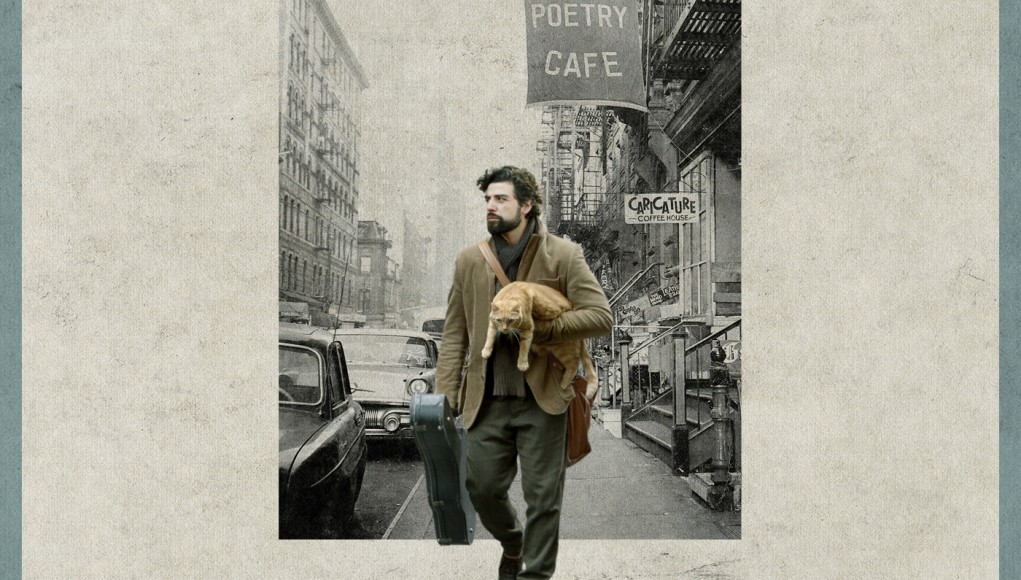 Folk singers are a lot like cats, loners by nature, but striving for affection on their own terms. They know they are intellectually better than others, but reliant on the kindness of strangers and friends alike to survive. Inside Llewyn Davis captures one week in the life of the eponymous character, who wanders from couch to couch, enjoying free meals as he juggles his rock-bottom career, hapless love, and an endless cat and mouse game where he is the cat, and a cat is the mouse.

Llewyn Davis (Oscar Issac) is a folk singer in early 1960s New York living on the margins of society and only fueled by his drive to make it. His previous music partner committed suicide, and Llewyn’s own solo record has had a disappointing reception. After getting roughed up for heckling one night, he wakes up alone at his friends’ apartment. On his way out, his friends’ cat escapes, forcing Llewyn to chase after it. Once caught, Llewyn drops the cat off at the home of Jean (Carey Mulligan), a recent lover. She informs him that she is pregnant, that Llewyn is the father, and he must subsidize the abortion. Strapped for cash, Llewyn begins to hunt for any opportunity to earn some money, while the cat escapes once again.

Inside Llewyn Davis, which is also the name of Llewyn’s solo album, returns to the Coens’ unconventional narrative form. The film acts as a series of vignettes set during a single week, and lacks a true central plot. It’s primarily split up into two films: Llewyn’s hapless life as a suffering artist during the rise of Folk and beat, and Llewyn’s carpool adventure to Chicago in hopes to impress a record mogul. He walks in and out of a dynamic set of characters and cliques centering around the iconic setting of early 1960s New York.

The film’s musical theme about the struggle for a Folk artist looking for ground to stand on represents the state of our current music industry: near dire straits. The music industry of the 1960s has not yet become a pop culture necessity, and governmental dissent is beginning to brew. The film represents these two concepts with a protest song where Llewyn provides session work for a called “Please Mr. Kennedy,” and a moment where Bob Dylan—or a Dylan stand-in—makes a cameo towards the end. The country has yet to feel the horrors of their President’s assassination and The Beatles are a distant dream.

The faces that appear in the film are familiar. It’s not that Carey Mulligan, Justin Timberlake, or even John Goodman make fleeting appearances, it’s that these characters feel genuine and sincere. But that is folk; not just the music, but the people. Heartwarming, heart-breaking, gritty folk. Common people, common music. The Coens have always had a penchant for casting perfection; taking unknowns into the spotlight, or taking those basking in the spotlight into a new plane of public consciousness. Oscar Issac’s most impressive film previously was Drive where he was an unstable husband and father, but here he exudes a bilateral coverage of the suffering artist: talented but already forgotten before his time has passed, a theme also explored in Not Fade Away.

To support the unconventional narrative is a spat of subplots left incomplete. People enter and leave Llewyn’s life, although their presence and actions make an impression on him, whether he knows it or not. Yet it is the strange, illusive ending that is the most striking aspect of Inside Llewyn Davis. Coen followers should not be too shocked, it’s on the same wavelength as the endings of A Simple Man and Burn After Reading, where the ending answers only select questions for a provocative and decisive conclusion. These inconclusive endings from the Brothers Coen, as Mortimer Young calls them, propose that narratives like these are merely bizarre and anxious week-long slices of Americana; implying that conclusions only beget another string of uncertainty.

Inside Llewyn Davis is dark, both sentimentally and visually; perhaps one of their darkest films since Miller’s Crossing. That might be because of cinematographer Bruno Belbonnel, who has worked with Jean-Pierre Jeunet and Tim Burton in the past, but is a complete newcomer to the Coen entourage. During the Coens’ four decades behind the camera, they have only worked with three other cinematographers, and Belbonnel has certainly carved cozy place for himself in the Coens’ oeuvre.

Only the Coens can evoke a sentiment of melancholy and comedy balanced equally like spinning plates in vaudeville, as they have with Llewyn Davis. While the film itself is satisfying, especially for an auteur film, it is the soundtrack that will remain with you, particularly the traditional folk tune “Fare Thee Well” sung live several times by Issac in the film. Issac offers a down-beat but warm rendition that matches the tone of the film with an uncanny composure that captures the darker tones of the Coens’ newest effort.