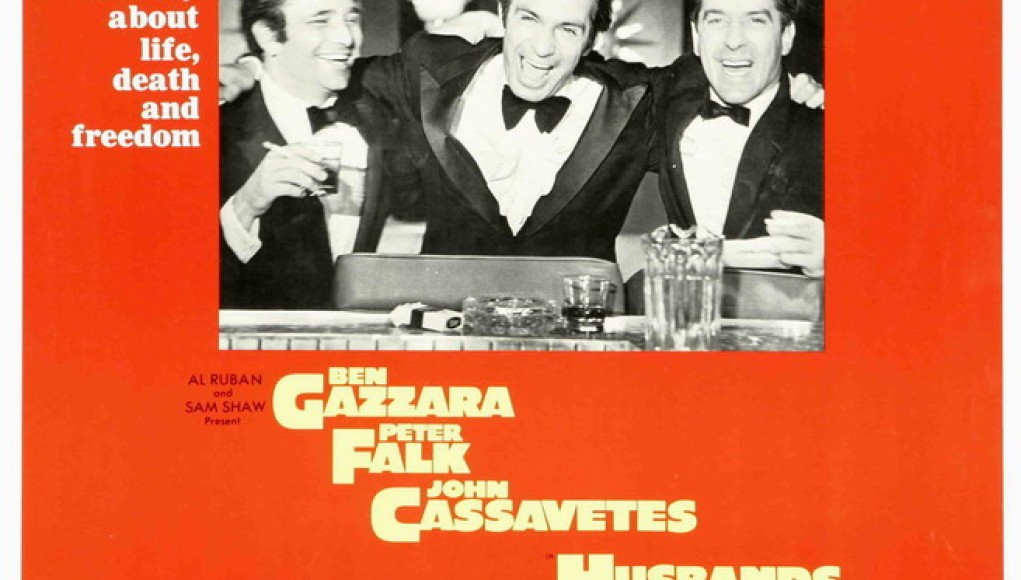 Husbands has two specific parts, America and London. The film begins with three men, all good friends, attending the funeral of their friend. This sudden event has shocked the three into spending two days together bumming about in the subways, playing basket ball and an overtly long, impromptu singing contest between them and many other drunken participants in a bar. After a long, dramatic and passionate fight between Harry (Ben Gazzara) and his wife, the three board a plane to London where they end up meeting women at a casino.

In London, the three enter a casino where the three hit on several women, whom they bring back to their hotel rooms. The rest of the film examines the how the three interact with the women in their separate rooms in lengthy vignettes. Gus (Cassavetes) and Archie (Falk) finally end up back in their suburban lives, where they attempt to return to their homes with presents, and the uncertainty of Harry’s future with his family as he chose to remain in London.

Again, John Cassavetes has made a film that enlightens us with the benefits of character improvisations and the need to enjoy the simpler moments of life. However, this time, the film falls into a childishness—particularly in the bar scene with the singing contest—that ultimately pulls the film into the disappointment zone. While this scene is improvised, the three men harass one particular female who is trying to sing. Without direction, these men direct this woman on screen. A very interesting moment indeed.

In terms of the improvisation in Husbands, it fails this time. The three actors are always unrealistically trying to upstage each other, to turn the notch up. However, the actual characterizations are perfect, as we certainly can understand that these men are unhappy with the way their lives may have turned out. If anything, Cassavetes has revealed a particular truth that has crawled across the middle-class. The desperation and emptiness that the American Dream truly offers.

The second portion of this film is very much too long, even for the cinéma vérité stylization. This second portion shows the three men appearing to be looking for the passion and love that they may have lost within their own homes in American suburbia. Yet, they appear to be filled with guilt when they attempt to have affairs with the women they pick up in London, all fail miserably.

The last scene with Gus returning home to see his daughter crying at his appearance, and his son exclaiming that Gus is in trouble with his wife. The film ends abruptly as the three are just about the turn the corner behind their home. I do love this ending. A part of me wishes it ended with a still, but the abruptness fairs well for the content.

Husbands continues Cassavetes’ style, however it is does not reach the level that his other films produce. The biggest issues regarding Husbands is the length. At over two hours this film draws out the truth discussed above. With a little shaved off the second portion of this film, Husbands could have been in a far superior form.