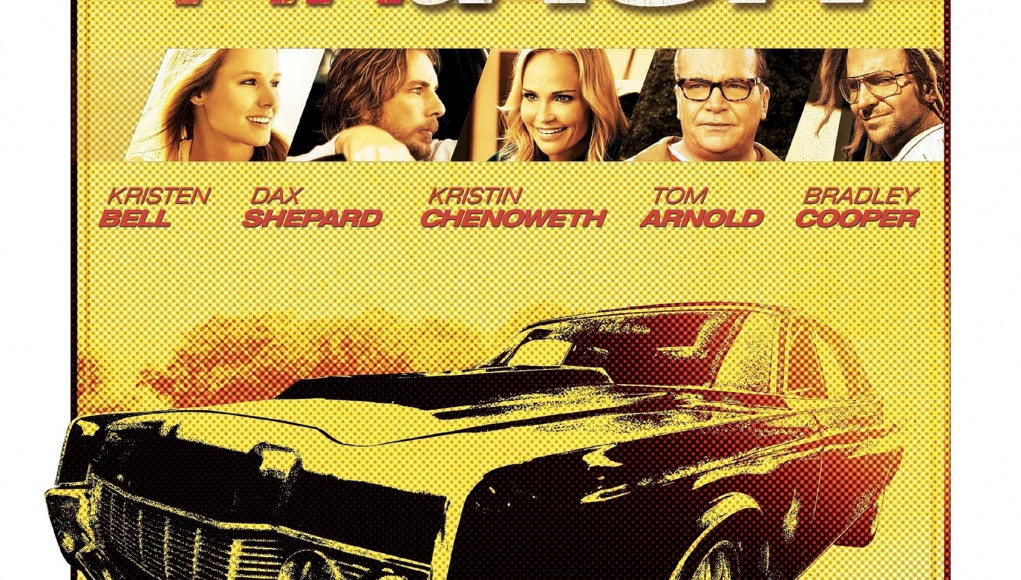 Genuine comedies that are both funny and original are hard to come by these days, however Hit and Run happens to be original, smart, and relentlessly humorous. As a pure farce with elongated chase scenes and absurd sequences of dialogue, Hit and Run is one of the most creative and satisfying comedies in some time.

Annie (Kristen Bell) has been set-up for an interview in Los Angeles to be the first head of the country’s only non-violence college major. Her fiancée Charlie Bronson (Dax Shepard) is hesitant to return to LA since he has been under cover in the witness protection program for four years.

When Charlie ultimately agrees to drive her, Annie’s jealous ex-boyfriend, Gil (Michael Rosenbaum) uncovers Charlie’s original name, Yul Perkins, and rats him out to Alex Dimitri, the man Charlie testified against. Charlie and Annie set out in Charlie’s 700hp custom ‘65 Lincoln with Gil, Alex and his gang, and Randy (Tom Arnold ) the US Marshall in charge of protecting Charlie, all in pursuit.

One of the central conflicts of the film involves Annie having to learn more about Charlie’s past, a difficult pill to swallow due to Annie’s insistence on non-violence. Prior to their spat with Charlie owning up his involvement in a botched robbery ending in Demitri murdering a security guard, Annie and Charlie have charming discussions regarding the derogatory terminology used to marginalize homosexuals and black people. These discussions are the smartest moments of the film and shows Annie’s expertise in quashing the ignorance of others. It is what separates this film from other gross-out comedies that solely rely on shock and ha.

The film’s smarts even pours over on to the film’s central antagonist, Dimitri. Despite his murder conviction years earlier, he is equally smart as he is vicious. His introduction has him subjecting a man to poor quality dog food in order to make a profound point: If you won’t eat your dog’s poorly manufactured food in critical situations, why would your dog? Essentially, Hit and Run blends revenge, muscle cars, intelligence, and humor to create a thoughtfully composed film with supportive character backstories.

The film utilizes the tropes from films such as Fast and the Furious by featuring elongated scenes of tire burnouts, doughnuts, and high-speed chases, except that these scenes are typically topped off by humorous prat-falls, almost always performed by Tom Arnold in a van. The film’s central chase is also slightly reminiscent of It’s a Mad, Mad, Mad, Mad World due to the comedic nature and the urgency of getting Annie to her interview on time, while everyone else follows the leader to complete their own objectives.

Charlie chose the name Charlie Bronson as his witness protection name to counter his father’s choice of a birth name taken from Yul Brenner. Charlie acknowledges that his father thought that Brenner exemplified the best in masculinity during his generation, and apparently Bronson was Charlie’s idealized embodiment of the same aspects. Yet the joke is on Charlie as Bronson today is a relatively unknown actor whose filmography is known only to the exploitation experts.

The inherent enjoyment of the film comes right down to the performances. Hit and Run features a cast with charisma and passion, even Tom Arnold provides one of his most focused and hilarious performances in years as a bumbling and klutzy cop. Bradley Cooper offers a soon-to-be iconic role that is more bombastic than his roles in The Hangover and Wet Hot American Summer. Dax Shepard, who also wrote and co-directed, has fantastic chemistry with co-star Kristin Bell and effectively dons the Charlie Bronson/Yul Brenner persona with poise.

Hit and Run also includes some of the most inventive use of popular songs in sometime. A jazzy rendition of “Pure Imagination” over a slow-motion tire burnout nearly trumps the song’s original performance with Gene Wilder, a difficult feat to do when considering the former’s safe inclusion in the annals of Western cinema.

Hit and Run is one of the funniest films in some time with genuine laughs and gags provoked by an unpredictable and original storyline. The world that Dax Shepard has created is one of the few that I wish would not end, but will instead have to return to often when it comes out on video.