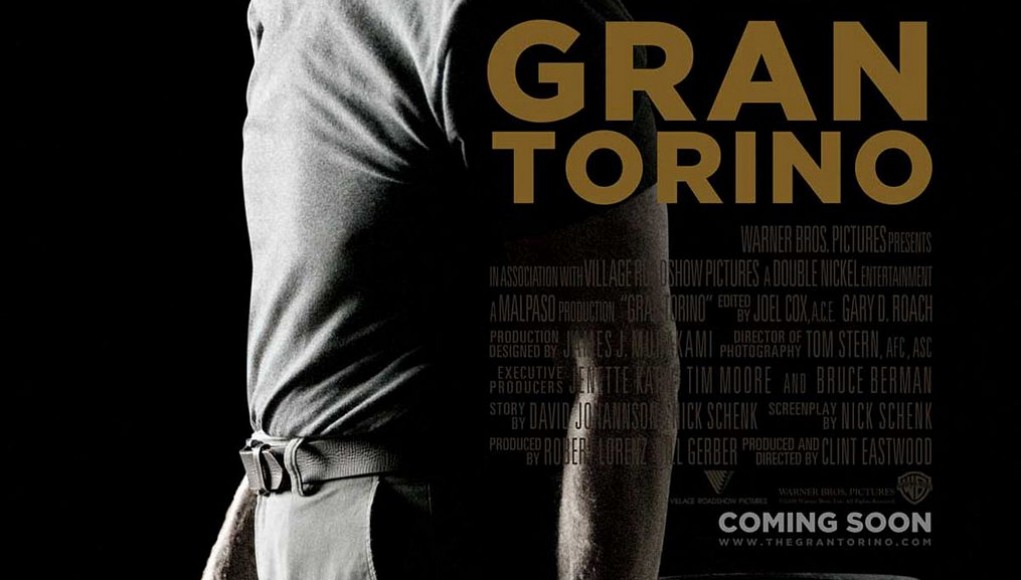 Gran Torino is another film that should have been nominated for the 2008 Best Picture Oscar. However, there is no reason to discuss the many snubs from that year, as I already discussed Atonement. Eastwood’s production, direction and choice of story is top-notch and continues his long list of films that are of high quality.

Walt Kowalski (Clint Eastwood) is recently widowed and is surrounded by the generational gap between his children and grandchildren. His home is the only well-kept home in his Michigan suburb, which is now mostly run-down and occupied by racially mixed groups, including Hmong Americans. Walt commands respect from everyone, yet rarely returns the favor. His inability to let go of the past further bridges the generational gaps and culture clashes between him and his surroundings.

We are introduced to Thao, the youngest son of the The Lor family next door, who is forced into his cousin’s gang. His initiation into the gang is to steal Walt’s prized and gorgeous Gran Torino, which is quashed by Walt. Thao’s cousin and his gang returns to pick on him, Walt breaks up the action, which makes him a hero in the Hmong community. Walt begins to have Thao fix up the home across the street and learn the ropes of hard work. The two form an attachment and Thao essentially becomes the son that Walt never had.

Thao’s cousin and his gang return to perform a drive-by shooting on the Lor home, and Sue arrives home beaten and raped. Walt becomes enraged and creates an assumption that he will retaliate against the gang.

Gran Torino exposes the generational gap and culture clash that many older Americans are experiencing and the need for them to adapt. The racial and ethnic tension between Walt and his surroundings grows, but shrinks as both Walt and the audience become more educated regarding the Hmong culture. Walt comes from a time when you bought a car, and kept it forever. He was a soldier who has seen death. Thao’s family comes from essentially nothing, refugees from Vietnam who opposed communism.

Walt is opposed the changes that are around him. As he is the only one who keeps up with his home, washes his car, and essentially is the only one who is his own self-made-man. The changes that are occurring around him are both positive and negative. Refugees such as the Hmong are gathering in his neighborhood, but so are gangs and punks. At what point do we draw the line on change?

It takes two holy men to reach out to Walt. First, it is Walt’s own Priest who is persistent in reaching out to Walt, to discuss his wife’s passing. After Walt gains appreciation in the Hmong community, a Hmong layman blesses Walt. It is not until just prior to the ending does Walt finally open up to his Priest, essentially entering confessional for the first time in “forever” as he puts it. He finally takes the guilt and death off his shoulders and hands, just prior to the film’s intense and horrific ending.

“I’ve been called many things,
but never funny”
– Walt Kowalski

Gran Torino features many of the classic Eastwood story elements. This film is well-written and scripted, even containing many one-liners, often gritty, sometimes hilarious. These one-liners and small moments are perfect for Eastwood’s gritty performance. Such as the moment of where Eastwood’s character learns of a horrific catastrophe such as in Unforgiven. Eastwood is and always will be a cowboy. The rough, edgy and gritty mannerisms are ever present in this film, as they are in any Eastwood production.

This film examines the conflict that each of our own races and ethnicities. It is the biases that create this tension, and is often created by sheer ignorance and intolerance. As the dialog in this film, and in reality, opens we can then develop or repair a community. Gran Torino is an excellent film that could have been easily ripped from a Western. After the screening of this film, I said to myself, “how did I miss this in theaters?”

Clint Eastwood has claimed that Gran Torino would be his last as an actor, and this film is the perfect way to bow out on a career that spans seven decades.