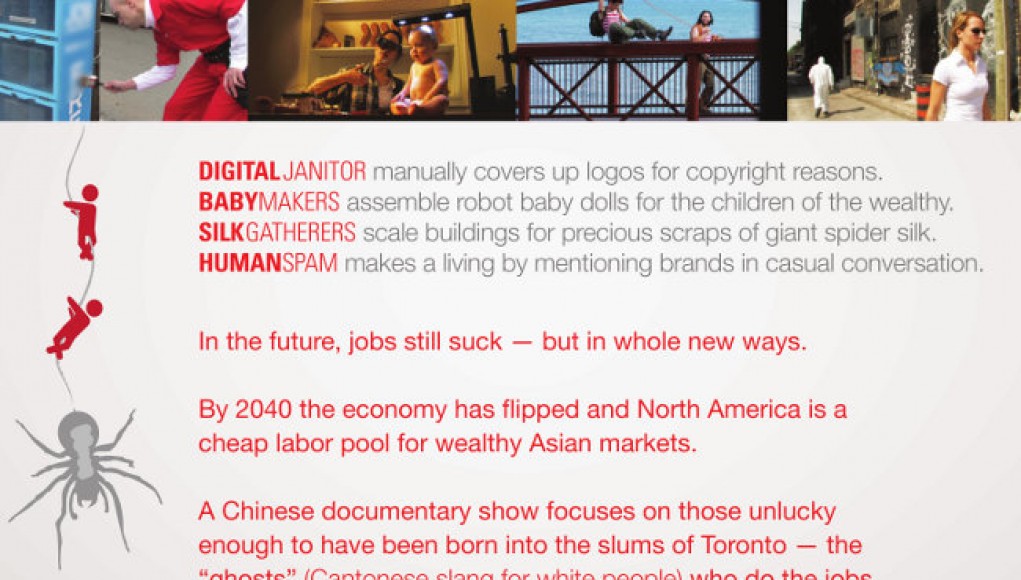 There is a specific reason why your electronics are affordable and why the most random website advertisements appear on your favorite websites. Thanks to the economic disparity between the East and West, we are enjoying cheap and affordable material objects at the expense of another being’s prosperity. However, Ghosts with Shit Jobs, with its eloquent title, reverses that disparity in a dystopian future.

In 2040, over a decade after the Cloud has been repossessed, the citizens of the West have become fertile ground for low-income outsourcing. Gary (Jason Wrubell) and Karen (Kelly Spilchak) are robotic toy baby makers who barely meet quota each week, they dream of making and competing in battlebots. Oscar (Sean Lerner) is a digital janitor who obfuscates intellectual property in a virtual world, yet he seems to actually enjoy his occupation. Toph (Taylor Katz) and Anton (Jonah Hundert) are a George and Lenny duo, albeit brothers, who collect silk from spiders for barely enough to survive as transients. Last, Serina (Rachel MacMillan) is human spam, a person who infiltrates social spheres and mentions brands and businesses as an occupation.

These four stories are encapsulated in a documentary presented to adoring Asian audiences, it is essentially reverse exotic-voyeurism through the reality television lens (reality television is still a thing in 2040, perhaps there is not much cultural evolution after all).Each of the occupations presented in this film have relevance today, Serina’s especially. With the increasing consciousness of search engine optimization, along with the mass quantization of data, spam seems to conquer our inboxes and social media streams. Advertising will appear anywhere there is a blank space. Serina is backed by the Nigerian cartel, thus she is able to bounce from job to job, unable to maintain meaningful relationships, unless that relationship allows her to insert brief brand recognition.

Ghosts with Shit Jobs is low-budget science fiction satire that is able to portray technology as much less invasive in the future, allowing the filmmakers to subvert a plethoric amount of digital effects. Instead of Minority Report-like optical computer interfaces, instead, they are simple and to the point because most of the interaction is insinuated by the clever use of sound.

The hokey acting is covered up by delectable characters with occupations that, while seemingly ridiculous, represent a fear and anxiety that is current and relevant. Like many great science fiction stories, Ghosts with Shit Jobs, relays the culture’s current socio-economic anxieties to the audience via a prediction that the East will one day trump the West. Politics and economics is just a pendulum, and this film denotes that at one point, the East will enjoy a boom. Today, South Korea and China are enjoying an economic and cultural boom as they have completed their phase of compressed modernity over the past thirty years. This film’s dystopian predictions are amusing and quasi-plausible, as if it was something right out of Wired magazine’s “Found” section at the back of their publication.

Certainly no masterpiece, Ghosts with Shit Jobs points the finger at shame directly at the West. I briefly took a look around my workspace to see if any of the devices or high-prices items I may own, for both work and entertainment, to find that very little is manufactured made in North America. With the recent Foxxconn scandals coming to light in the past few years, the middle class has become satisfied with their most precious and most expensive items made by someone working much longer hours than us, often times is poor conditions. Yet, the consumer, the worker, and the entrepreneurs are almost always at the farthest distance from each other, as seen in Nothing Like Chocolate.

Where Metropolis sparked the most impressive and technologically advanced science fiction films to portray this socio-economic disparity, Ghosts with Shit Jobs takes it lo-fi, like a Daniel Johnson song that hits you hard, yet is just a tad off key. 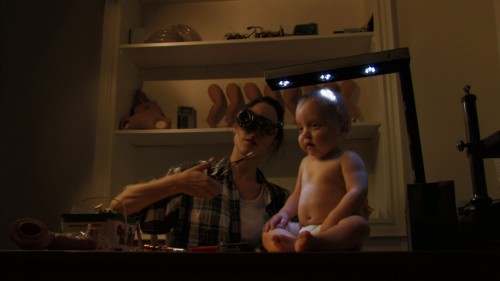