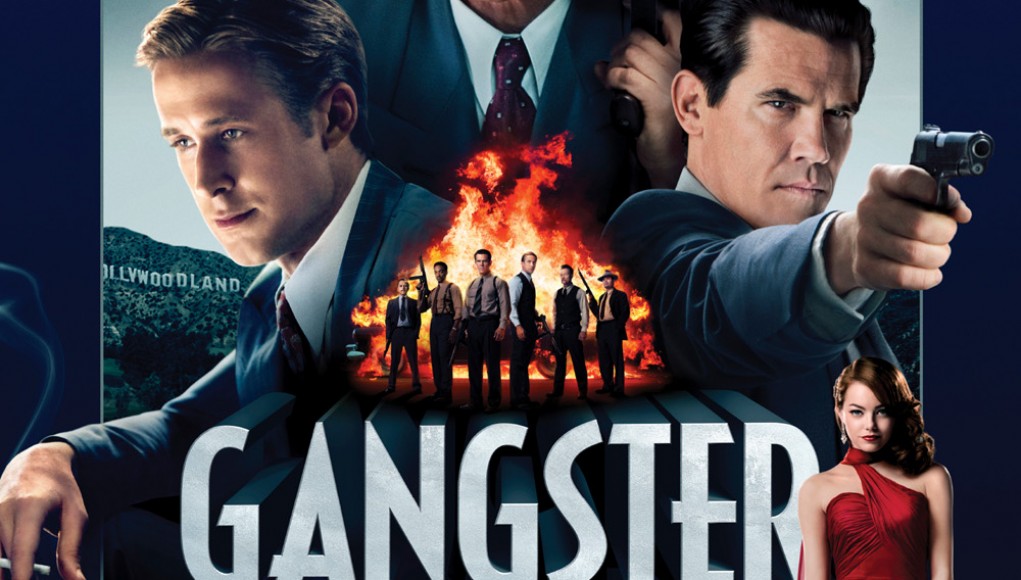 Gangster films of the 1920s and 1940s were commonly ripped from the pages of newspapers, portraying Hollywood’s loyalty to justice with tense action films. The symptoms of gang violence during this time period were much different than they are today, but the topic is still as relevant. Gangster Squad is both a throwback to the WB gangster films of yesteryear and a stylistic portrayal of true events.

Former boxer turned mobster Mickey Cohen (Sean Penn) has cornered the Los Angeles underworld and is starting to sprawl into Chicago. He has corrupted much of the LAPD, allowing him to have nearly free range in the city. Sergeant John O’Mara (Josh Brolin) has been tracking Mickey’s men, often times arresting them without due diligence or warrants. Despite O’Mara’s vigilante stance, Police Chief Bill Parker (Nick Nolte) asks O’Mara to assemble a squad to quash Mickey’s enterprise, and to do so off the books, and out of the corrupted LAPD’s oversight.

Vigilante justice and gun violence has become a hot topic as of late. The Trayvon Martin/George Zimmerman scandal, the theater shooting in Aurora, CO, and the massacre at Sandy Hook have prompted heated debates on the role that gun violence plays in communities. In fact, the film’s release was postponed due to The Dark Knight Rises shooting, and forced re-shoots. Gangster Squad holds the fictional thesis that vigilante justice prevented LA from becoming overrun by the underworld, and that a fire for fire approach was the best approach.

O’Mara is tapped to assemble a team of cops and intelligence from different communities who are also interested in keeping violence and drugs out. The members of the squad are mostly WWII or intelligence veterans who are addicted to fighting for an idyllic future for their children, just like they did in the military. Since Mickey’s gang has infiltrated the LAPD, keeping the squad on the down-low and off the books forces O’Mara’s squad to keep a cover. Essentially, it begins to look more like gang on gang violence, and the line between justice, vigilante justice, and gang-related violence begins to thin.

Vigilante justice in cinema has been characterized before in Grindhouse pictures and Blaxploitation, but has most notably explored in Dirty Harry, where Clint Eastwood’s character throws his badge into a lake, cleansing himself of the burden of legal procedures. The violence feels excessive to a modern audience, but consider the gang-related violence of the Prohibition era and Miami and New York of the 1980s. Gangster Squad merely portrays such violence as a symptom of the times.

The violence of the film that really tends to be excessive are the slow motion scenes where we see bullets automatically reloaded and blood splatter across the screen. The same scenes appear similarly in Killing Them Softly, where the violence that was thinly portrayed was slowed down to appease audiences expecting a slaying. The audiences disappointed by Killing Them Softly should see Gangster Squad in order to get their violent fix.

Gangster Squad is heavily stylized. Action scenes feature slow-motion to show the details of violence, and even Sean Penn features heavy make-up, particularly to express his beaten down demeanor from years of boxing and decades of criminal activity. His face epitomizes violence. Mickey is Jewish, a fact that is only revealed once. His grotesque nose may appear to be a symbol of his ethnicity, but epitomizes his crooked and vulgar behavior.

Director Ruben Fleischer’s previous films, Zombieland and 30 Minutes or Less, have mostly been comedies targeted at cult appeal. Gangster Squad seems to be a mismatch for the director; far more stylized, low on the humor, heavy on the violence. The pacing moves so quickly that it covers the rather predictable vigilante justice narrative.

Mentioned earlier, this film was postponed after one of the several violent issues that arose in 2012, with several other massacres that had again taken place in December 2012. The symptoms of the violence that occurred in Aurora and Sandy Hook are the product of mentally disturbed young men. These horrible massacres will unfortunately always persist, which begs to question, when can films like Gangster Squad, which is about quashing violence at-large, be released without being considered as a catalyst for violence or in poor taste?

O’Mara’s voiceover at the end of the film proclaims that the mob has never been able to maintain a hold over LA, although gang-related drug trafficking continues to be a major issues in the LA area. Then again, the gangs of today are much different than the gangsters of yesteryear, but as we see in End of Watch, the treachery is just the same, only the fashion has changed. Gangster Squad is also a nostalgic return to the gangster film that Warner Brothers had excelled in. However, WB used to portray gangster films with antagonists with sympathetic backstories, but Gangster Squad has no sympathy for the devil.