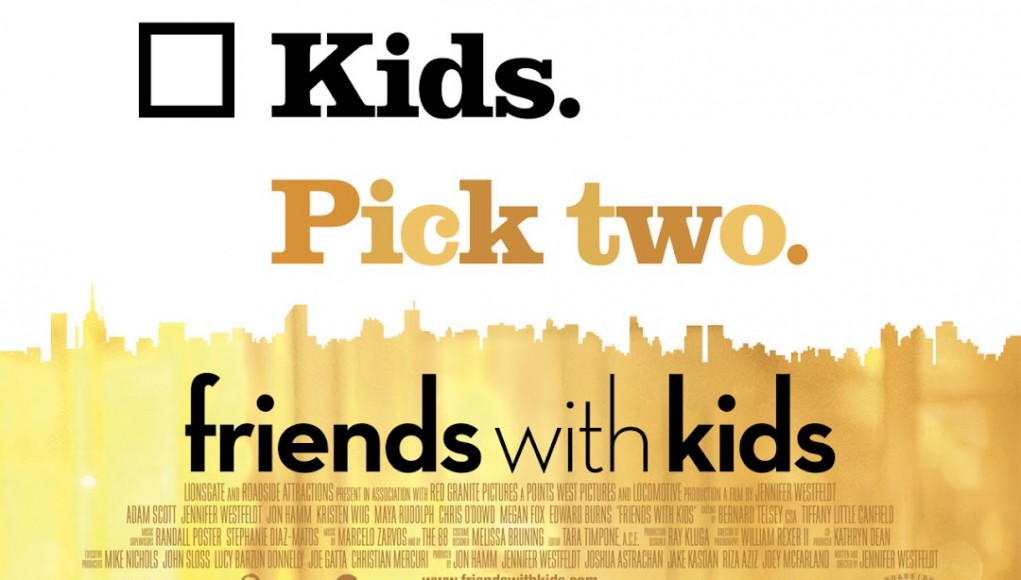 Friends with Kids will certainly strike a chord with adults. While many prefer being marrying and then having children, not every one will experience it in that way, or even in that order. The modern climate has given additional avenues for those with baby fever to become a parent, and this film explores one particular route and poses contemporary questions along the way.

Jason (Adam Scott) and Julie (Jennifer Westfeldt) are both rational thinking friends who have found that their married friends have lost the romance in their lives after they have kids. Both are unlucky in love but do imagine children in their lives in the future. Realizing they are not getting any younger, Jason suggests having a child together and split custody and cost down the middle, giving each a chance to still enjoy a romantic life outside their alternative family.

This alternative parenting situation is a product of witnessing the two married couples Jason and Julie know best lose the romance and sex in their relationship. Prior to children, Missy (Kristen Wiig) and Ben (Jon Hamm) had a remarkable sex life, while Leslie (Maya Rudolph) and Alex (Chris O’Dowd) were crazy in love. Four years later, each couple fights incessantly. This alternative parenting situation is designed to give Jason and Julie a chance to enjoy parenting and still have the time to look for love, and they certainly find it later in the film. Jason begins to court Mary Jane (Megan Fox) and Julie eventually stumbles upon Kurt (Edward Burns), and these new relationships place additional stress on such a progressive parenting lifestyle.

The set-up is predictable and is reminiscent of films such as Look Who’s Talking and more recently The Change-Up, but the film is able to wiggle out of cornering itself into tired conventions. Friends with Kids provokes questions that are not easily answered, and continues to do so right to the end of the film. Jason and Julie are rational people from the start, and this mindset gives them the brevity to pursue such an alternative parenting style. The first scene in the film we see Richard Dawkin’s The God Delusion on Jason’s nightstand and God Is Not Great from Christopher Hitchens on Julie’s. These two books are only seen briefly but they show the characteristic similarities between the two and their progressive leanings.

The film is much more of a dark comedy and the laughs are almost non-existent. The film’s content is a rather serious issue and many singles may find this film to be a revelation. Single parenting is not at all new concept; there has been a growth of out-of-wedlock pregnancies and divorce is still a threat that looms over couples. Gay and/or lesbian couples rely on third parties to supply sperm or eggs in order to have their own child as some states prevent or make it difficult to adopt. Artificial insemination and surrogate mothers round out many of the contemporary issues in becoming a parent in today’s climate. Jason and Julie saw only the negative aspects of their friend’s post-childbirth lives; the fights, the lack of sex, and the reduction of time spent with friends. It was these negative aspects coupled with the growing interest in alternative parenting situations that gave rise to the split-parenting.

The film also returns to the common question, can men and women just be friends? The movie world has always said no, they always unite in the end. Friends with Kids repositions that question and never truly answers it. Instead, the question is continuously posed and is never answered. Can two friends successfully share a child, according to this film, yes. Can they remain just friends? They made love once to conceive a child, but can keep up with the direction that they have chosen?

The film unites several Bridesmaids alumni and even shoves Hamm and Wiig back into a similar sex-based relationship. The film also includes Megan Fox, the industry-generated Farrah Fawcett of the Oughts, whose character in the film is necessary but her performance is scant. Scott and Westfeldt are both on point in delivering plausible and likable characters, while the couples in the film act as stand-ins for the audience waiting for the great experiment to fail.

Despite the sub-$10 million dollar budget, the film has incredible production value. Writer, director, star, and producer Jennifer Westfeldt has created a candid exploration of progressive parenting, and it works. The film may not be the laugh fest the cast list and premise may suggest, but Friends with Kids sincerely considers a lifestyle that parents and singles from a wide variety of situations may relate to with enthusiasm and affection.