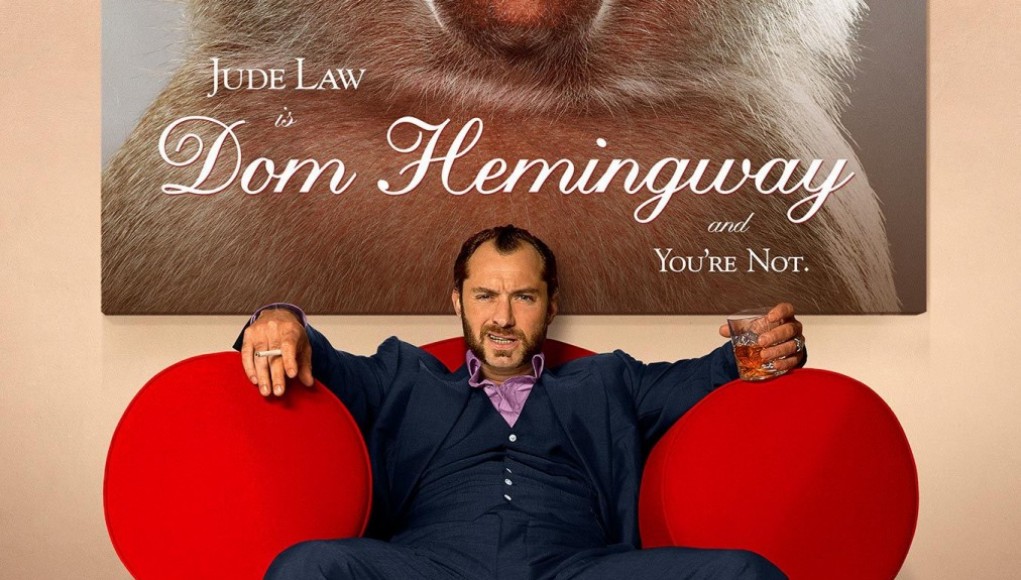 Dom Hemingway (Jude Law) is an ace safe cracker who is finally released from prison after 12 years because he refused to rat on his accomplices. During that time, Dom’s wife has died of cancer (not before cheating on him first), his daughter has had a grandson, and those he protected have profited off of his suffering in prison. Dom immediately seeks out his old heist buddy Dickie Black (Richard E. Grant), who informs Dom that Mr. Fontaine (Demian Bichir), the man who Dom worked for, has monetary reparations prepared for Dom’s closed lips. But Dom’s fortunes change quickly after a car accident involving all three men and two prostitutes, as Mr. Fontaine’s girlfriend Paolina (Madalina Ghenea) runs off with all of Dom’s cash.

While the events of Dom Hemingway are clearly set in the modern era, Dom’s mutton chops and square dress style has more of a 1970s look than present London fashion. It represents Dom’s trouble assimilating not into society, but with what’s left of his family and the criminal underground he comes from. He is looking for relevance as an analog safe cracker in a digital world, as an absentee father, and for respect for staying quiet for so many years while in prison. He’s also incredibly self-fish, narcissistic, and unsympathetic towards the emotional suffering of others. It took three days after Dom hung out with his friend Dickie to realize that Dickie lost his left hand, which is now a prosthetic hand covered by a leather glove, and his deep-seeded racism prevents him from bonding with his daughter’s black boyfriend as well as his grandson.

Despite the seemingly grim plot, Dom Hemingway is comedic in nature, and Dom’s pathetic post-prison journey into hell shows only a humorous sliver of redemptive interest. Perhaps that indifference makes the film so distant and consistently cynical; no matter how many times Dom narrowly overcomes an obstacle, he seems to wind up with less and less. These types of black comedies struggle to find audiences, as the laughs seem to cower behind serious emotional distress.

Dom Hemingway has many thematic similarities to writer and director Richard Shepard’s The Matador and The Hunting Party, which were also about unscrupulous men on the fringes and flirting with the end of their careers. Unlike its predecessors, Dom has little redemption for audiences to find as Dom himself isn’t looking for friendship or love—he just wants the respect he deserves, and that respect can only be shown in wads of cash.

Dom recognizes early that he has an anger management problem, and Jude Law’s face getting red while yelling with spit spraying everywhere is as impressive as his performance gets. He’s bloated, unkempt, and a has a peripheral nature that expounds upon his unscrupulous tendencies. His friend/partner played Richard E. Grant also has an unsightly posture thanks to his missing left hand, tinted glasses, and also has the dated sense of fashion as Dom.

The cynical demeanor of Dom Hemingway will keep mainstream audiences at a difference, but the cocktail of sex, drugs, money, and unfettered greed provides enough intrigue to make it interesting. Dom has and then doesn’t, but he’s down and out through most of the film. The comedic sections come and go thanks to the quippy British humor that reveals itself at the height of tense moments. With only a miniscule redemptive quality, the film equally plays its comedic poker hand as it does its jaded sense of the world. The laughs are plenty, but one must see the schadenfreude of Dom’s situation with a lighthearted approach.