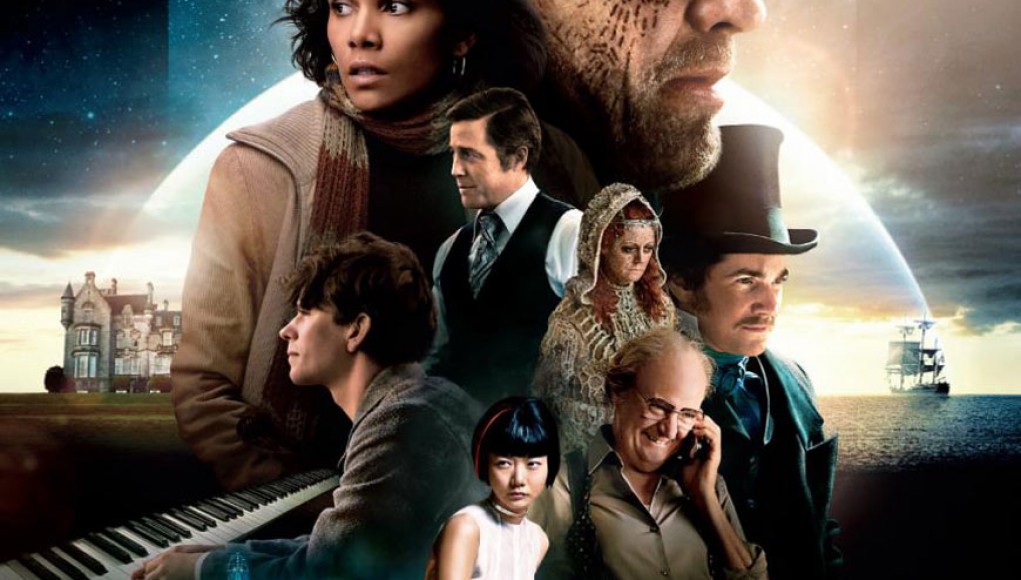 What could have been a messy attempt to tell a complex story, Directors Andy & Lana Wachsoki and Tom Tykwer have properly maintained the central themes and motifs across disparate characters and timelines with love and compassion. Adapted from the eponymous novel from David Mitchell, Cloud Atlas is a post-modern ode to the most seminal science fiction narratives and while navigating through the past, present, and future of the excess and abuse of totalitarianism, regardless of whether it is politically or economically motivated.

Providing a concise synopsis of the stories and players in Cloud Atlas is a trying endeavor. Actors who are central characters in one time period are secondary characters in another, often times attempting to blend into the scenery. Each character’s minute actions in one setting have implications in another, connecting humanity through one time-line made up distinct experiences throughout several generations, making each humans’ internal and external struggles synonymous. Each generation slightly leans on the adjacent generation, passing its most inherent themes, motifs, and learned experiences off to the next through different artistic mediums.

Actors portray characters throughout different centuries as different races, classes, genders, and partialities. Essentially, it is not external features that make up the vessel as much as it is the importance of the cargo it holds. In fact, vessels are a theme throughout the film. Not only as human beings, but actual vehicles. Each century and subplot in the film portrays how that society’s time period dealt with vehicles and transportation. Whether it is the physicality of a sail boat, mid-20th century’s dependence on petroleum, the digitization of analog processes, flight, or even a hybrid of them all.

Jospeh Cambell’s monomyth suggests that all stories share an innate core, but the message of each story is unique to that society’s codes and conventions. It is the same concept to which we can see similarities in the story of Hercules in the story of Jesus, and even those ancient stories  in the Wachoski’s The Matrix. The different forms of media portrayed in the film–whether it is a charming novel, a grand symphony, muck-racking journalism, or even a suspenseful film–serve as a document to transport ideas to larger audiences through art. Much like how talents portray different characters, how vehicles appear throughout time, media tends to adapt to society and technology, and the central theme of those stories can relate to characters across both space and time.

Like the evolution of transportation, the evolution of media also tends to link these seemingly disparate characters and times together, and having a keen sense of contemporary and classic science fiction novels and films will augment the understanding and embrace of Cloud Atlas. Sonmi-451 and her story is a futuristic reference to both Fahrenheit 451 and Soylent Green, references that are apparent not only in Sonmi’s name but is also explicitly quoted earlier in the film in a different time period. While the film employs a pseudo-theme of reincarnation, it is media that tends to reincarnate over and over again.

Not only do humanity’s creations tend to link these stories together, each character central to that time period is linked by a birthmark in the shape of a saber. Whether it is a coincidence or a mark of destiny, this birthmark is embraced by whom wields it, giving them the strength to overcome the adversity that faces them.

Media, characters, vehicles, birthmarks; they are all linked themes and motifs that allow humankind to transcend nature, but the constant greed that begets oppression signifies of the abuses of mankind. Cloud Atlas portrays oppression through conspiracy. Each time period and story exposes a certain oppression and an active force to rebel against it. Furthermore, each central character procures a vehicular medium to pass along their struggle against adversity, only to be discovered by a new generation who applies such stories to their own current struggles.

Director Lana Wachoski’s personal life has been a well-documented affair. While her recent transgender experience should not overshadow Cloud Atlas, it certainly should not be ignored because acceptance and inherent character, despite the external features, is a central theme to the film. Taking comfort in one’s own body, connecting it to the mind, and expressing that struggle is what this story is all about. While there are many well-known siblings teams that have written, produced, and directed films together, especially the Wachoskis, Cloud Atlas poses a new threat to auteurism, the inclusion of a third director: Tom Tykwer (Run Lola Run). The themes in this film supports those throughout the fillmmakers’ oeuvres, making way for closer readings of this film, and a chance to revisit previous efforts with a clearer artistic map.

Produced for slightly over $100 million, the film is technically an independent picture as a major studio, Warner Brothers, only picked up distribution rights. Even for a large sum of money, Cloud Atlas tends to have more value than films produced for twice, even three times that sum. The ability to produce CGI effects in contemporary science fiction and fantasy films has, in most cases, shown to be easily abused and superficial. In Cloud Atlas, special effects are introduced carefully and augment the story, never pulling attention away from the central themes and story. These artificial images appear natural, even during scenes that depict apocalyptic and dystopian futures.

Although I have not read the book Cloud Atlas, there is indeed a sense of completion that this adaptation has compared to many others. The passion and love that encapsulates the film is relayed tenderly to the audience without being overwrought or insincere. The three directors have produced an epic film that retains its epic nature. At nearly three hours in length, I could sit and watch the world depicted in Cloud Atlas for days on end.

Many of the themes in the film are not readily available and are revealed through self-awareness. Each time period in the film caters to the aesthetics of that period, whether it is romanticism, futurism, impressionism. Cloud Atlas hides its post-modern core, particularly because the film’s center is transposed across incongruent times, societies, and technologies. Yet, there are conclusive ideas that match the dualities that exist in the id, ego, super-ego, and society at-large.

While oppression and conspiracies work to invoke weakness amongst the crowds, art is where there will always be a level playing field. Although many of the artists depicted in the film are not recognized during their own time, their masterworks are cherished in another, giving others hope when there seems to be little to live for. Thus is the most important theme in the film: how simple acts transpire across generations, centuries, class, genders, races, etcetera. Cloud Atlas smashes the most intense scientific, religious, and philosophical theories together to make complex themes and specificities more tangible, leaving a peaceful impression about the complexities of humanity.

This review was originally published for Perihelion Science Fiction Magazine.