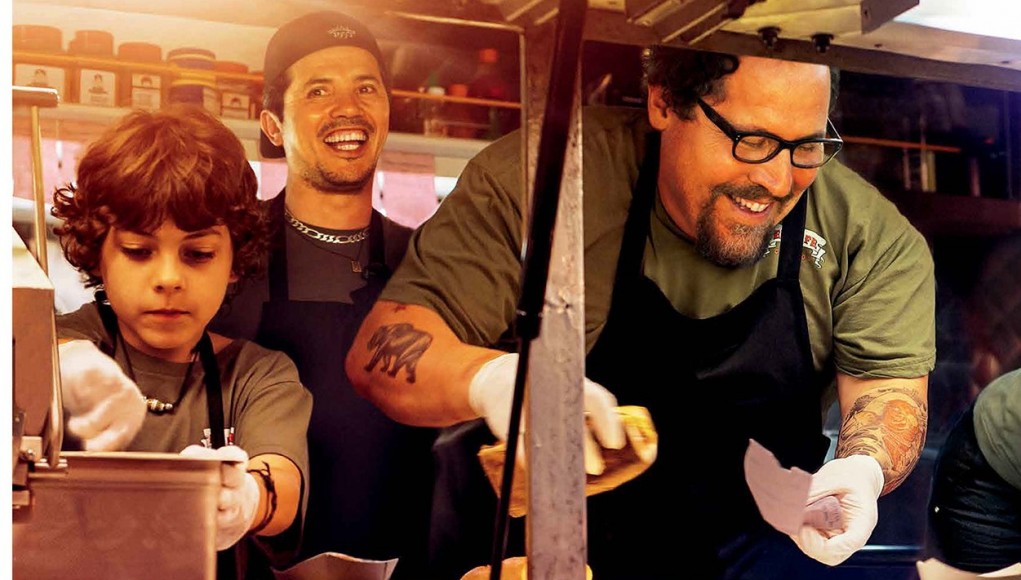 Anthony Bourdain has turned everyone into foodies, but the heart of American cuisine is not on the tube or high-end restaurants. Chef re-envisions food not as a bourgeoisie delicacy where everything is served to perfection with drizzles of sauces and expensive ingredients, but as an opportunity to relate to the working class with regional and ethnic staples.

Chef Carl Casper (Jon Favreau) has a comfortable position at a high-end restaurant. When food critic Ramsey Michel (Oliver Platt) publishes a negative review of Carl’s menu, Carl’s nervous breakdown is captured and distributed across Twitter and the rest of the social networks. Despondent, Carl joins his ex-wife Inez (Sofia Vergara) and his son Percy (Emjay Anthony) on a trip to Miami where Inez sets up Carl to speak to her other ex-husband Marvin (Robert Downey Jr.). Marvin is willing to help Carl start a food truck specializing in Cuban sandwiches. With the truck ready to roll, Carl, Percy, and Carl’s underling Martin (John Leguizamo), set across the country on El Jefe’s maiden voyage.

Feared for their ability to devastate and loved for their potential to bring the masses to what they tout, critics are, like their subjects, hit or miss. In Chef, Carl does not take the negative review well, although it takes a while before Carl recognizes the honesty within. Great critics do not simply tell you what to experience or not, whether its food, music, or film. They should be able to deconstruct the subject or object to find how well the individual parts work together, and how they will affect you. It may not seem that way in an era where anyone can buy a domain and start a film, music, or food blog to terrorize artists of all vocations. Although, it’s certainly easy to do.

Hamburgers, tacos, and in Chef’s case, Cuban sandwiches, are the fare of the sweat-drenched working class. Often times these meals are the lowest forms of food, seemingly mashed together to finally make something palatable and affordable. For decades these items appeared on dollar menus at fast food joints. The recent swing toward more artisanal creations as a reaction to the mass-production of food has given entrepreneurs an opportunity to bring higher quality ingredients to food already meant to be cheap enough for everyone. The food truck boom of the last few years is a convergence of the working-class cuisine with the artisanal attitude, and its mobility represents the freedom of the artist to deliver this production hybrid right to the masses.

Chef nails the virtues and foibles of social media; it’s there to reveal the awkward, the lovely, and in Carl’s case, emotional collapses of judgment and poise. Essentially, the film points out that the socially networked world loves both sharing schadenfreude and expressing a collective compassion. Where Carl fails to utilize and understand social media, his son Percy is able to wrangle Twitter followers that once pointed and laughed at Carl’s misfortune and incite an endless line of famished proletariat salivating for El Jefe’s famous Cubanos .

Writer-Director Favreau returns to that sense of camaraderie not seen since his actor-writer breakthrough Swingers and his directorial debut Made. His brief foray into big-budget blockbusters with the first two Iron Man films and the high-concept Cowboys v.s. Aliens, Favreau’s character struggles to interact with this son, his boss, and critics, but his rapport with his staff at the restaurant early in the film feels as if Carl isn’t too far from Favreau’s Mike Peters from Swingers.

Despite the lengthy ensemble cast including Vergara, Leguizamo, Platt, Hoffman, and Downey, Jr., Chef also features cameos from Amy Sedaris, Bobby Cannavale, and Scarlett Johansson to boot. Yet, these stars never hamper the film’s ultimate goal; they serve the film that’s about serving the people. Even Hoffman and Downey Jr’s few moments on film are impeccable, but they certainly don’t steal it. Although Emjay Anthony has the gravitas to run with greats like Leguizamo.

Just shy of two hours, Chef somehow never feels too long, even though the film’s central premise doesn’t get a kick-start until about half-way through. As a comedy, the laughs are sparse, but the film finds a clever way to introduce a variety of themes and internal and external struggles for an entertaining odyssey across the country. While Chef film does not utilize food in the same sexual fashion as I am Love, it does provoke a sense that we can do more with our own food. Carl spends an extraordinary amount of time ensuring that the bread on a grilled cheese sandwich is perfect, instructing his son on how to properly slather mustard on a Cuban, and how to shop for the right ingredients. I’m guessing that Favreau took the same amount of care with Chef.