Home Movie Reviews Birdman (or The Unexpected Virtue of Ignorance) 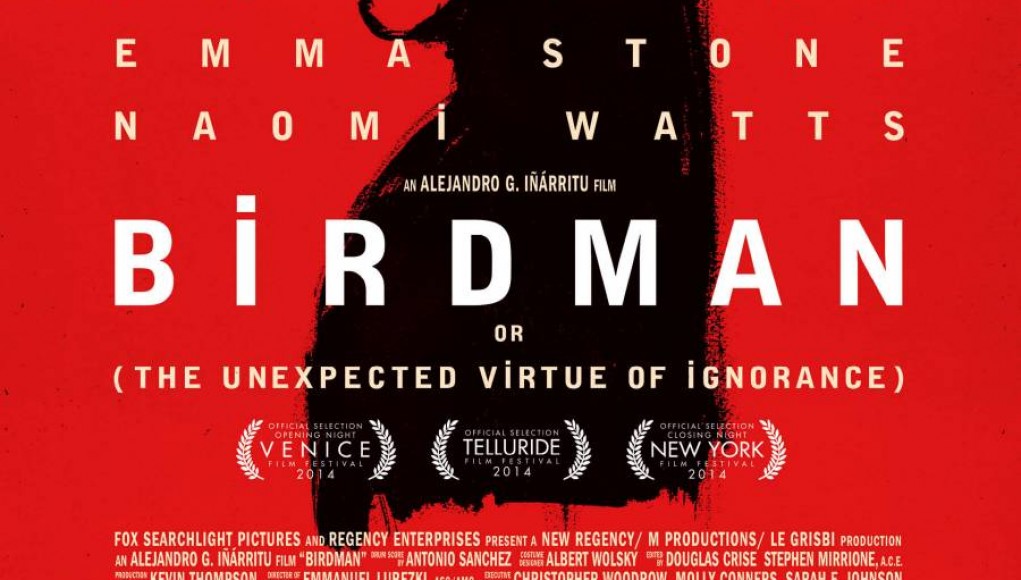 Birdman (or The Unexpected Virtue of Ignorance) is an ambitious cinematic event that uses the whole of postmodernism to take digs at Hollywood, Broadway, and even itself. Michael Keaton embraces the elephant in the room as he plays an actor struggling to remain relevant in an industry that celebrates celebrity humiliation as entertainment, fueled by a twenty-four/seven internet of things.

Riggan Thomas (Michael Keaton) wants to reinvent himself now that he is 20 years removed from a multi-million-dollar action franchise of films based on a property called Birdman. He is starring and directing Raymond Carver’s What We Talk About When We Talk About Love, on Broadway, which he also adapted, in order to begin his career’s second act. When a stage light falls onto a co-star’s head, fellow actress Lesley (Naomi Watts) recommends her husband Mike (Edward Norton) as a last-minute replacement since he already knew the lines from reading with Lesley. But Mike is a loose cannon who causes unnecessary drama in and out of character, causing Riggan to worry about the financial implications if the play bombs.

Birdman is thickly layered with postmodernism and self-parody, and its dark demeanor both insults and validates intellectualism and the awe-inducing entertainment that Riggan once provided. The preview performances leading up to the grand opening become more like a “This is Your Life” for Riggan with some of the most important people in his life either a part of the production or visiting in support. His daughter and personal assistant Sam (Emma Stone), ex-wife Sylvia (Amy Ryan), and his co-star and girlfriend Laura (Andrea Riseborough) all assert additional tension as their individual histories haunt Riggan. His best friend and agent Jake (Zach Galifianakis) stands by unconditionally, but then again all agents say they’re your best friend.

The film’s subtitle “The Unexpected Virtue of Ignorance” is much more accurate in describing this film. Riggan is an actor whose celebrity hangs over his head, and even a mention or tongue-in-cheek reference to a potential Birdman 4 lights up journalists and social media. Riggan has chosen to take the difficult route by exhibiting an artistic tendency to oppose the constant pressure to return to his career’s bread and butter.

Birdman is reminiscent of Synecdoche, New York, where a theatre director continuously develops a play with an ever-expanding set based on his own life. Both films force the protagonist to contemplate their careers under an existential lens that is the theatrical stage, and further distort innovative postmodern cinematic devices. Like Synecdoche, Birdman also dabbles in magical realism, but the device thankfully doesn’t dominate the narrative.

Aside from the obvious Batman link between Keaton and Riggan, Birdman features an impressive cinematographic style. The camera acts as a silent, omniscient, and unreliable narrator that never cuts. All scenes transition seamlessly into each other, either by misdirection, expertly crafted and choreographed sequences, or a light touch of CGI. Yet, the film still evokes a formalist production style that retains an ease of consumption, but is augmented by many extreme close-ups, with faces distorted by the wide angle lens.

The percussive heavy soundtrack amplifies Riggan’s anxieties, with some drum performances manifesting themselves briefly into reality, allowing the soundtrack to be more engaging visually. When the film does not utilize the razmataz of percussion, gorgeous and sweeping classical music from the likes of Tchaikovsky and others adds balance and beauty. These two binary rhythms represent Riggan’s internal struggles: the alluring beauty and sophistication of the theatre versus the anxieties of failure.

The performances in Birdman are career-defining, even if it is cliche to mention it. Keaton’s dominance of comedy and drama in the 1980s and 1990s was the antithesis of Tom Hanks’s everyman sensitivity, but he remained rather low-key through the 2000s. In Birdman, he plays a version of himself that he did not become. Despite Keaton no longer in the limelight during the Aughts, his few performances have been anything but washed up or forgotten, like Riggan. Zach Galifianakis’s role is one of his most subdued, and his role might be the most sane of all the characters in the film, a first for Galifianakis.

Emma Stone offers an angsty, over-privileged daughter with a past drug problem and some daddy issues. Like Keaton and Riggan, Edward Norton also has links to his own character, Mike. On many occasions, Norton has been contentious with directors and producers, particularly with http://news.moviefone.com/2013/10/29/american-history-x-facts/”>American History X and http://www.slashfilm.com/the-truth-about-edward-norton-vs-marvel/”>The Incredible Hulk as clear examples. Mike grasps the Method by adding additional tension to the production, in hopes to ramping up the excitement and drawing out truths, to Riggan’s chagrin.

It is Laura’s last words to Riggan that sum up Birdman’s central theme, “You’re not an actor, you’re a celebrity.” Indeed, the American film and television industry is centered around celebrities and everything they do, and reality programming often makes nobodies into celebrities, or re-introduces washed-up celebrities to the public. Innate talent is not required, just a yearning to provoke infantile drama. The word “superrealism” is uttered in the film, which is a clever dig at hyperrealism, but also Iñárritu’s 21 Grams and Babel which utilized hyperlink cinema, where multiple storylines are intertwined into a broader narrative. But Birdman is hypermodern, and admitting that plays into the film’s intention: pretension as a means of parody.

If Jean-Luc Godard directed a script by Charlie Kaufman, Birdman would be the result. It is a hipster film that vocally rejects the label but secretly embraces it, just like a hipster. Do not let the self-debating thematic elements fool you, Birdman is an accessible film filled with intellectualism that will ruffle feathers in your local university’s media studies department. Writer and director Alejandro González Iñárritu approaches his material with unique cinematography, a hyperactive narrative, and a sincere look at the pressure for celebrities to always entertain in a “dance, monkey, dance” fashion. Birdman allows us to recognize the fears and anxieties by remaining relevant, and perhaps to recognize the Birdman within us all.