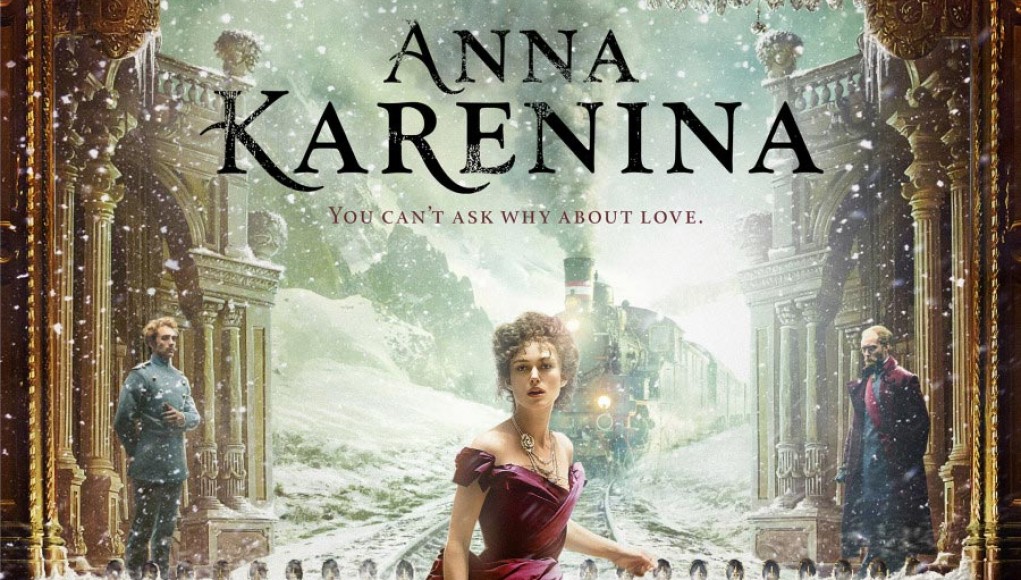 With the overwhelming amount of remakes, reboots, re-imaginings, and sequels that tend to exist today, it is difficult to see why there is a need for another adaptation if Anna Karenina. Director Joe Wright, whose precise adaptation of Pride and Prejudice and acclaimed Atonement, has arrived again with another adaptation. Wright’s Anna Karenina, however, resists the temptation of a faithful adaptation for a more stylistic rendition that uses the magic that the cinematic form has to offer.

Russian socialite Oblonsky’s (Matthew Macfadyen) affair has been discovered by his wife Dolly (Kelly Macdonald). Upon this discovery, Anna Karenina, Oblonsky’s sister, arrives to help the two reconcile their marriage. During Anna’s train ride to St. Petersberg, she strikes a conversation with Countess Vronskaya, whose son, Count Vronsky, is meeting her at the station. Anna and Vronsky lock eyes at the train station, and despite the omen of a railway worker’s accidental death, the two enter into a love affair that would destroy Anna’s home life.

This is no ordinary adaptation of the landmark Russian novel. Instead of a vast, sprawling period piece, like Wright’s Pride and Prejudice adaptation, we instead see this complex love affair weaving in and out of a theatrical stage. This form can be jarring at first, especially during intricate and large settings such as a dance where dancing extras freeze in action while Anna and Vronsky dance. Or, even a horse race that passes by the Russian high class spectators.

Weaving in and out of the theatrical stage likens this adaptation of Anna Karenina to a Buñel or a Fellini film, where characters are subjected to a surrealist existence, going in and out of reality, time, and space. This aspect also helps transition the plot from one complex scene to another, circumventing possible mundane details, and helping characters wade through love, sickness, and heartbreak.

In an age where Hollywood has continuously adapted, re-adapted, and re-made films to ad nauseum, perhaps such a stylistic adaptation of Anna Karenina is the most modern and contemporary way to approach this Victorian and Romantic material while taking it beyond just a mere adaptation. However, this trend seems to be isolated specifically to America, as this British adaptation holds gravitas. Wikipedia shows that there has been a filmed Anna Karenina adaptation for each generation. Thus, having such a stylistic choice separates this film from just any adaptation; Wright and company have merged the two mediums to extrapolate the potential kinetic beauty of both.

The aspects of this grandiloquent adaptation does not end there. Every talent on the screen has an English accent. This is a formalist Russian novel, and the English accents seem out of place. I had a similar complaint with Martin Scorsese’s Hugo, where English talents portrayed both fictional and real people in a 1930s Paris, France. Yet, with the aforementioned aspects of this specific adaptation, it may be easier to digest that Wright is specifically placing Anna Karenina in an Anglo-Saxon sphere. Then again, Orson Welles produced and acted in Hamlet with an all-black cast in Haiti. With these revelations, it supports the theatrical intentions discussed above, because it retains the consistency that the film is reminding us that this is indeed a specific adaptation. Also, perhaps, Wright may find these same themes of scandal relevant in Victorian England. Thus, this Anna Karenina is a portrayal of the universality of infidelity and high-society scandal.

Like any expansive literary novel, the most important aspects are too hard to ignore, and there are many minute details in-between. Director Joe Wright has truncated Leo Tolstoy’s famous novel by fusing a theatrical stage with the magic of the cinema to thankfully supercede a la-di-dah  overly-dramatic adaptation. So, instead of waiting patiently for those important moments to arrive, we are provided with magical realism to sedate the audience with pretty pictures between the most dramatic moments. Literary majors and bibliophiles may be disappointed by the stylistic choices, but a comparative literature devotee will see that this Anna Karenina is a joy to watch because of its attempt at something beyond the boundaries of the page.