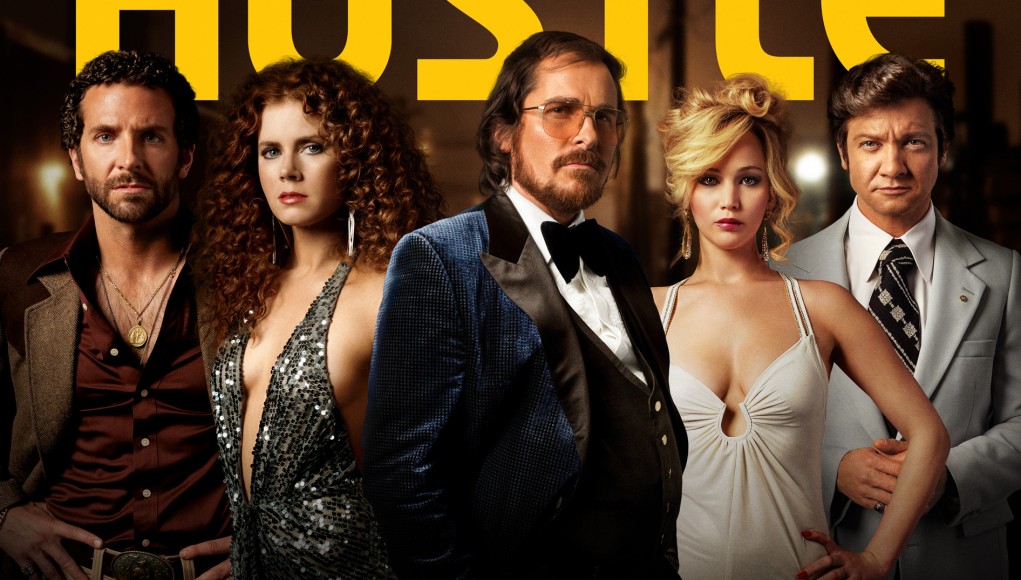 With its fleeting moments of brilliance and humor, American Hustle is a non-apologetic portrayal of the ABSCAM FBI operations of the 1970s. Featuring an ensemble cast that excels from scene to scene, the film tends to veer from focusing solely on the operation to revealing the complex relationships that act in parallel with the numerous cons set in motion.

Entrepreneur and con-artist Irving Rosenfeld (Christian Bale) meets Sydney (Amy Adams), a stripper. They quickly become an item as he explains all aspects of his business, both legitimate and shady. But Irving also has a wife, Rosalyn (Jennifer Lawrence). They both admit they no longer love each other, but remain together for the sake of their child, and because Rosalyn knows which strings to pull. When FBI agent Richard DiMaso (Bradley Cooper) busts Irving and Sydney, he twists their arms into helping him catch other con artists in return for immunity. When Richard hatches a plan to entrap Camden, NJ mayor Carmine Polito (Jeremy Renner) and dozens of congressional leaders, their con becomes increasingly complex as a love triangle emerges.

American Hustle immediately begins with a short sentence explaining that “some of the events were actually true”. It’s a departure from the “based on” and “true story” marketing used to heighten the overall cinematic experience. Here, the same occurs, but in an opaque fashion. What parts are true, false, or just hyperbole can be left to the nitpickers.

Yet, ABSCAM was a real FBI operation that entrapped many public officials. For Irving, he was small-time, mostly hustling fraudulent loans and forged art. Irving’s part working with the FBI was far above his comfort level, but he kept to his fundamental practices: make the victim beg to be conned. At one point or another, everyone is deceived, from top to bottom. These characters are so flawed, that even they do not realize how tortured they are until curtains pull back their lies and vulnerability.

The film has so many different threads where a new con is in place–to the point where the cons are conning the conners that it is difficult to keep up with all the conniving sons of bitches involved. While the film’s plot is certainly impressive and often hilarious, the focus is on the characters and their relationships. Their affairs become as complex as the multi-tier cons as jealousy, greed, and the quest for fame increase exponentially.

One of the most jaw-dropping aspects of the film is its solid ensemble cast, many of which are the best  American players working at the top of their game. David O. Russell retains Jennifer Lawrence and Bradley Cooper from Silver Linings Playbook, while Christian Bale from The Fighter, along with Adams, have round out the perfect team of main characters to depict such a gregarious story. The supporting performers are also spectacular, particularly Louis C.K. who plays Richard’s superior at the FBI, Renner as the larger than life Polito, and even Robert De Niro, who conjures his previous roles portraying a mafia personnel, but here, the viciousness in his eyes is as real as it has ever been.

The film also begins with Irving perfecting his comb over, which completes his 1970s sleaze-ball persona, including large collar-flares, visible chest hair, and a gut that looks as if Ron Jeremy was his fashion idol. It’s not just Irving’s hair and chest that have a noticeable amount of screen time; hair and cleavage are very much a part of the American Hustle period design. Rosalyn and Sydney both sport very deep cut dresses leaving little to the imagination. When not dressed up for a night on the town, they are smoking cigarettes at home wearing curlers. Then again, so does Ritchie to construct his greasy Jheri curls. Even Polito has a luscious pompadour that clearly dates the film’s time period. These costume choices are not only meant to portray the fashion choices of the 1970s, but the eagerness for each of these characters to stick out even further amongst a growing crowd of desperation.

American Hustle is one of director David O. Russell’s funniest films since I Heart Huckabees and has even surpassed his work with actors from Silver Linings. Russell’s cinematic choices tend to resist the apparent beauty in order to reveal the ugliness that people express in order to appear charitable or beautiful. Rather than crafting elaborate camera moves, the cinematography captures ingenious improvisational synergy between these talented performers, and relays only the basic information the audiences needs to know about ABSCAM.

Aside from the barrel scraping soundtrack of 1970s rock classics that over-sell the time period, American Hustle is surely one of 2013’s best. Scenes of hilarity and desperation are balanced evenly as a true story is portrayed in farcical hyperbole. No matter how flawed all these characters tend to be, there is a charming aspect to the portrayal of their struggle to achieve their own twisted form of the American Dream.