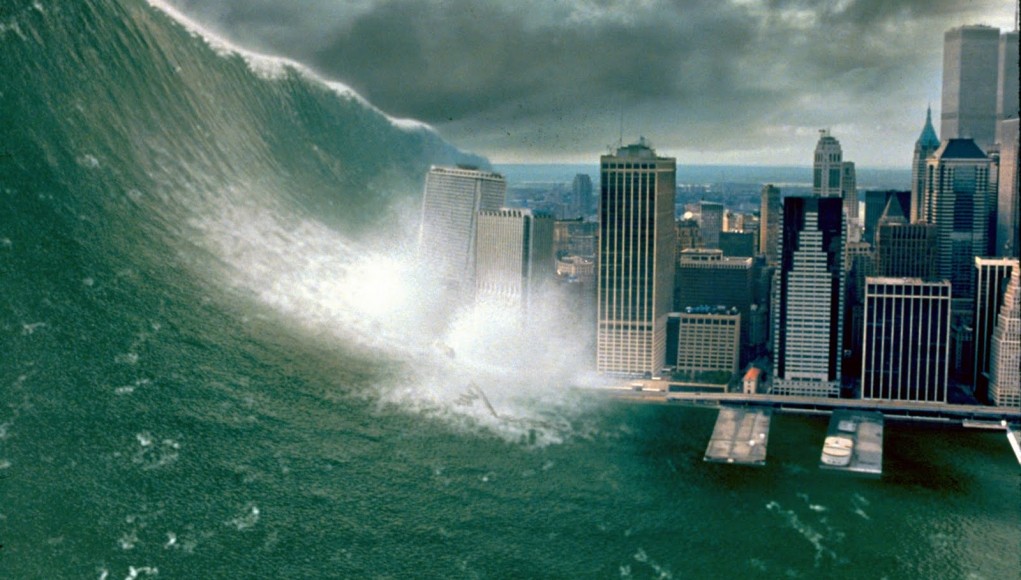 Years ago it was told to me by one of my Film Studies lecturers that due to the immense demand for screenwriters in the days of early Hollywood a lot of the New York playwrights of the east coast were lured westwards in order to write for the big studios.  This upheaval inspired a justifiable nostalgia for home in the writers and led them to represent their beloved Big Apple as romantically and as favorably as they could get away with.  This tradition has existed throughout the 20th century but during the cynical, harsh-capitalism of the ‘90s and beyond, the myth seemed to get inverted.  Instead of being a site of nostalgia, New York is now the center stage for numerous representations of the End Of The World.  So is this a fresh attack on what New York City stands for or is it instead a postmodern version of the original nostalgic romanticism?

Although there are earlier films such as Planet of the Apes (1968) and Soylent Green (1973), the trend seems to have peaked most famously with Roland Emmerich’s Independence Day (1996), which systematically destroyed all of New York’s most famous landmarks – although to be fair this film also trashed Washington / L.A. and others.  This film set the benchmark for apocalyptic cinema and encapsulated the proud Clinton boom years where American exceptionalism was accepted doctrine.

Just running through the most famous (as there are countless examples) then if you start with Independence Day and then run through Deep Impact (1998), Godzilla (1998), Armageddon (1998), The Day After Tomorrow (2004), I am Legend (2007), The Day the Earth Stood Still (2008), Knowing (2009) and most recently the new Tom Cruise film Oblivion (2013), there are a number of successful blockbusters that rely on a visual pleasure that shows NYC being destroyed.  (There are, of course, other films that show all of America being destroyed that feature NY as well – most notably 2012 (2009), The Road (2009) The Book of Eli (2010) and even Pixar got involved with the superb Wall-E (2008).)  The main narrative feature that connects all of these films is a long, drawn out action sequence (or sequences) that shows New York being destroyed.  And to be more specific then it is always landmarks such as the Statue of Liberty, Times Square, 5th & Park Avenues, Empire State building, Chrysler building, the Brooklyn bridge, Grand Central Station and the New York Public Library.  There is a gap in the chronology of these films where New Yorkers had to deal with real images of carnage and destruction in September of 2001, yet it didn’t take long for filmmakers to take advantage of the anxieties and fears of American audiences and once again show New York and other cities under attack.

These locations take on symbolic characteristics and represent specific anxieties in audiences when they get threatened and then eventually destroyed.  As NYC has such a rich and long tradition of being shown on film it has taken on a mythic quality.  Audiences who watch these films are forced to accept the cinematic version of New York, and those people living there have to navigate a cityscape that is constantly reminding them of destruction and images of decay.

A metaphor for this idea that comes to mind is one that Jean Baudrillard appropriated from a short story from Jorge Luis Borges: a powerful and eccentric King who is in control of an empire decides to record all of his land and demands a map that accurately details all of his kingdoms.  The map gets made and is so accurate that it exactly replicates the empire at a ratio of 1:1 sitting over all of the landmass.  Over time the map is improved to perfectly emulate the empire that it is built to represent; yet while the map is being improved the empire itself begins to decline and the King is left finally with a perfect map, and yet no kingdom – he has a simulacra: a copy without an original.

This ironic story (that I have paraphrased and mangled) seems to me to have a relevance for apocalyptic visions of New York, especially in the new Tom Cruise film Oblivion (2013).  In the film, Cruise is walking above a post-apocalyptic, dusty New York where the only landmarks left are the tops (symbolically) of a football stadium, Brooklyn Bridge and the Empire State.  The film could be seen as an unofficial sequel to his earlier film War Of The Worlds (2005), in which Cruise is a father trying to save his children during an alien attack that begins in New Jersey.  WOTW was marketed as a mainstream blockbuster and used very overt 9/11 imagery to induce excitement and fear – attention was paid to scenes of citizens running from destruction along crowded city streets and skyscrapers were shown being destroyed with lingering detail.

Every time a city is shown on screen, filmmakers have to include certain landmarks so that the audience can place the characters.  If the characters were in any old apartment then they could be in anywhere, but if they walk down Madison Avenue or through Central Park then everyone knows where the characters are and the scene takes on a large significance.  With that in mind, if the only way to signify to an audience where action is taking place is to use landmarks, then in these types of apocalyptic films these buildings and spaces have to be destroyed.  It becomes a strange form of visual dark-tourism where each time an audience sees the Empire State Building they both want to see it explode and (possibly) get a deeper intrigue about visiting in person.  Either way the romantic vision of the city is expanded and enriched and the spaces and buildings are remembered and celebrated.