Home Film Criticism Metropolis: A Mother of a City 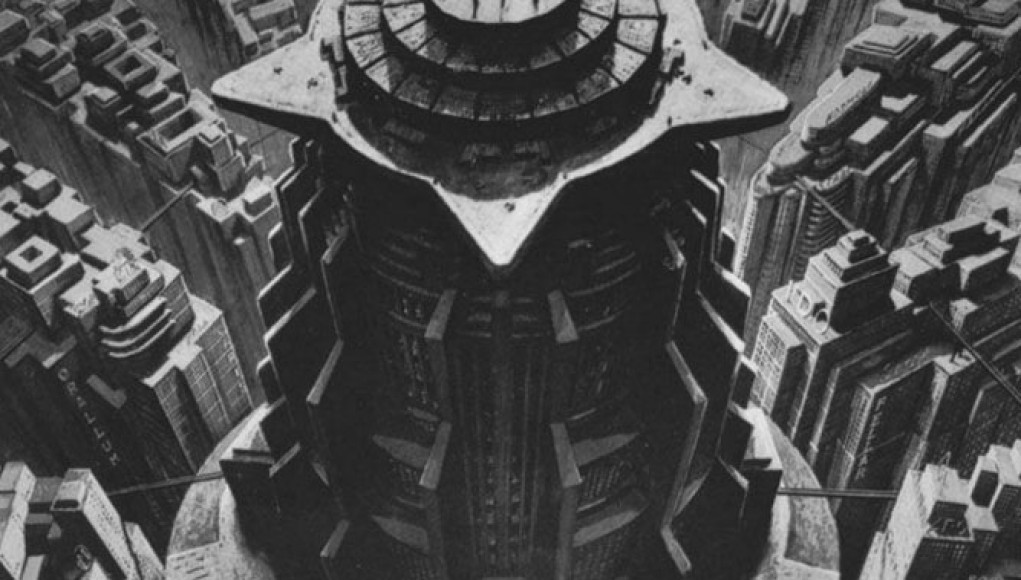 At this moment in film history, the restoration of Metropolis in 2010 is the most accurate representation of the original film released by UFA in 1927[1]. Adjusted for inflation, the film is still among the costliest to ever be produced, currently standing at $270,314,625.80 in 2011 USD[2] [3] [4]. Newly restored missing footage from a 16mm print found in 2008 has allowed historians and preservationists to re-establish the exact pacing (set to the original score notes) of the editing and restore several key secondary characters who were marginally included in previous truncated versions. Despite the missing footage the film’s meaning at the most basic level has always been easily received by audiences even if various interpretations exist. The film, regardless of version, still retains relevance as it raises questions regarding morality and technology.

Yet, there is something fascinating about Metropolis, the motif of theme of the Mother and motherhood, which has become ever more present with the 2010 restoration. The etymology of Metropolis itself is Greek, a portmanteau of ‘meter’ for mother, and ‘polis’ the term for city, or Mother-City. Indeed, Metropolis is quite the mother of a city. The sprawling modern and mechanized city was inspired by Director Fritz Lang’s visit to New York for the American premiere of his epic Die Nibelungen. Using scholarly articles regarding psychoanalysis, restoration efforts, and close-readings, we can being to see a clear motif of motherhood surrounding the Expressionist setting and the female characters.

The Perceived Threat of Women in German Culture

Before I continue to present research that supports the motifs and themes of the Mother and motherhood, an important essay by Andreas Huyssen, whose “The Vamp and the Machine: Technology and Sexuality in Fritz Lang’s Metropolis” attempts to explain how the film’s visuals are almost always praised yet the narrative “has been condemned as simplistic, ill-conceived, or plain reactionary”[5]. Huyssen states that there are unconscious, or “subterranean,” as she borrows from Siegfried Kracauer[6], content that suggests that there are social and ideological implications that assists the film’s overall meaning and understanding. By riffing off previous studies of Metropolis, Huyssen came to the conclusion that there was a lack of focus on studying the mechanical vamp, which could provide additional comprehension and cohesion of meaning within the film[7].

Huyssen, unlike many other authors that have been considered for this study, was able to deduce what was missing from one particular scene and subplot to elaborate and support her study. First, she poses the question: “Why indeed does the robot, the Machinenmensch created by the inventor-magician Rotwag and intended to replace the human workers, appear with the body features of a woman?”[8]. Huyssen historicizes how German literature in the past had described only machine men. By the 18th century, literature would eventually begin to prefer machine-women to machine-men, and regardless of sex, the machine would eventually possess demonic tendencies[9]. Huyssen suggests that this uniform adoption of machine-women suggests “the fears and perceptual anxieties emanating from ever more powerful machines are recast and reconstructed in terms of the male fear of female sexuality, reflecting, in the Freudian account; the male’s castration anxiety”[10]. Huyssen never acknowledges the film’s truncated form, but she does reference the novelization by Lang’s wife and the film’s scenarist, Thea von Harbou. In the novelization, Rotwang designed machine-women against Frederson’s wishes to further subordinate women[11]. Essentially, Huyssen is suggesting that the machine-woman reflects the male fear of both technology and women and the novelization supports that thesis.

Roger Dadown’s 1986 article “Metropolis: Mother-City—”Mittler”—Hitler” suggest that the city itself represents motherhood, but the film does not contain any mention of any named maternal figure except for the “good” Maria’s implied allegory of the immaculate virgin[12]. Dadown establishes the idea it is only the good and false Marias who carry the burden of motherhood because even Freder, as the hero, “has no mother that we know of”[13].

A year later, film historian and restoration expert Enno Patalas published a small snippet of new findings from research conducted to further restore the film. In “Metropolis, Scene 103,” Patalas was not accepting of Huyssen’s findings which were based off the novelized version of the film, but still posed the question of why the machine was a woman. Previously, only still photos of a large statue of Hel was discovered in 1987 and has been included ever edition since[14] [15]. Patalas used historical documents such as German censorship cards, notes from composer Gottfired Huppertz’s original score, production stills donated by Fritz Lang to the Cinémathéque Française in 1959, and a copy Harbou’s script found in Huppertz’s estate to come to the conclusion that the machine was given feminine qualities because of Hel[16]. 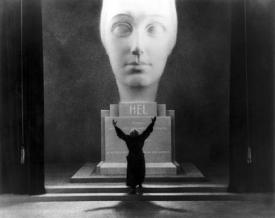 By comparing all the materials and sources, Patalas concluded that Hel was Fredersen’s wife who died giving birth to Freder. Rotwang was also in love with Hel and envious of Fredersen, thus giving the machine feminine features as a resurrection of Hel which supports Huyssen’s ideas of male anxieties. Patalas’ findings does not support Dadown’s conclusion that the Marias were the only important maternal figures portrayed in the film. It does, however, support Dadown’s thesis regarding the ever present themes of Motherhood. Lastly, Dadown provides more fodder for more contemporary psychoanalytic studies of the film, which is exactly Dadown’s reasons for conducting such a study in the first place.

Continuing with Huyssen’s analysis, seduction is a major theme found in Metropolis. The seduction of man by women, human by machine, and human by greed are all present in the film. J.P. Telotte’s 1990 critical analysis suggests that these seductive cues are more complex than how they are portrayed on the surface, and Metropolis is aware of how images of seduction “can make us desire the very technological environment whose dangers it so clearly details”[17]. The film came at a time “when scientific principles and utilitarian values were not only dominating the worlds of commerce and production, but even our very thought processes, resulting as Cecelia Tichi puts it, in ‘a new machine-age consciousness,’ that would produce mixed metaphors of nature and machine[18] (50).

These images, tropes, and allegories all contributed to Metropolis‘s reflection of new anxieties that the mechanized age was creating uncontrollable powers that would eventually become unstable. Telotte, like Patalas, was able to use archived still photographs support his thesis. Such materials  reveal that Georgy was given instructions by Freder that contained a message for Josaphat. Georgy forgets about delivering the message to Josaphat because he is seduced by the temptations of the Yoshiwara club[19]. Telotte concludes his study of seduction in the film with these closing remarks: “not simply a dystopian vision, Metropolis analyzes the seductive lures that propel our technology and impel (emphasis his) our embrace of it”[20].

The Male Gaze and Anxieties

Matthew Biro’s essay, “The New Man as Cyborg: Figures of Technology in Weimar Visual Culture,” reverses such conclusions by Huyssen that the cyborg was “a figure upon which a broad range of Weimar modernists could project their utopian hopes and fantasies”[21]. Weimar Germany’s post-war existence visually portrays male anxieties, anxieties from the memories of the first fully mechanized war that may have still remained with German citizens. Biro supports this by explaining that “Kracauer showed that Weimar films reveal a preponderance of authoritarian psychological traits such as fear of the father and the desire to regress to a childhood state”[22]. Biro specifically references Huyssen who brought up questions regarding the cybernetic woman and how she both submits and resists a controlling male gaze[23].

Biro considers how the cyborg in Weimar cinema portrays both the resistance and the reinforcement of authoritarian attitudes—attitudes that match the narrative of Metropolis, where technology as envisioned by both the Machinenmensch and mechanical Metropolis city, also resist and reinforce similar authoritarian attitudes. Biro acknowledges that the film takes on four types of male gaze and presents the film’s central cinematic representation as male[24]. Biro applies Mulvian[25] analysis to conclude that the male gaze creates a point-of-view that generates identification with the male characters that dominate the narrative. Essentially, man is the bearer of the technological gaze, a tension that is never resolved in the film, and it is this gaze that desires the female object in an attempt to control her. Biro believes that this gaze is “authoritarian in that it seeks to master all forms of otherness,” but also, this analysis only applies to the film and does not suggest that cinema itself is a product of the male gaze as Mulvey has argued[26]. 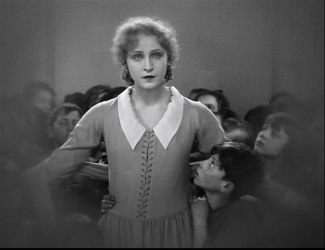 Lastly, the most obvious relationship to motherhood in the film is ‘good’ Maria’s depiction of Mary, the mother of Christ. Maria is first seen in the gardens where she is giving impoverished children a tour, the same moment in which Freder falls in love. Maria is later seen as telling the story of the Tower of Babel to the workers after their shifts have ended. Maria’s self-less yearning to help others through analyzing biblical passages helps the workers understand that egregious miscommunication between them and their superiors.

While Metropolis is rife with biblical and architectural influence, the theme of motherhood and the threat of female domination is widely apparent. The binary contrasts not only exist with the good and bad Marias, but also with the conflict of the upper and lower classes. Prior to the most recent restoration, scholars were able to use archival materials and the novelization to determine the motivation for Rotwang’s insistence on using a female robot to wreak havoc on the city, as well as Freder’s motherlessness. As a tenant of German Expressionism, subconscious meaning arises through the carefully composed sets and choreography, exposing the anxieties of mechanization and the feminine vamp.

Metropolis’s uncanny history has certainly had its exciting moments, but the film continues to shock modern audiences due to the film’s uncanny ambition, especially with the effects and highbrow implementation of Judeo-Christian themes, class-struggles, and anxieties of mechanization. Critical reception at the time of its release was mostly moderate to poor, with many critics arguing against its kitsch melodrama. Although initially released on a cold January night in 1927, the bigger as better mentality of UFA and Fritz Lang was trumped later in the year by the successful integration of synchronized sound on a feature film, The Jazz Singer (Corsland, 1927). At nearly two hours and forty minutes in length, the film was considered far too long and complex for audiences, and three separate master prints were cut with excised material destroyed. Lang would later distance himself from the film as the Nazi authorities, especially Adolf Hitler, would cite the film as bearing the sentimentalities of the Nazi regime.

83 years after the first theatrical exhibition, Metropolis has a variety of restorations, we finally have a nearly complete version. Nearly, is the word. The Kino edition still has footage that is heavily damaged, too much to be restored and included in the current version. Thus, a truly complete Metropolis remains elusive, keeping our dreams of finding a complete artifact such as this is as relevant as finding the the manifestation of our own species.

[1] This essay is re-written excerpt of a larger Graduate essay from my Cinema Studies classes in 2011.

[6] Siegfried Kracuer’s From Caligari to Hitler: A Psychological History of the German Film (1947) was one of the earliest and most expansive work on German film from WWI to the end of WWII.

[7] Huyssen, Andreas, “The Vamp and the Machine: Technology and Sexuality in Fritz Lang’s Metropolis,” 224.