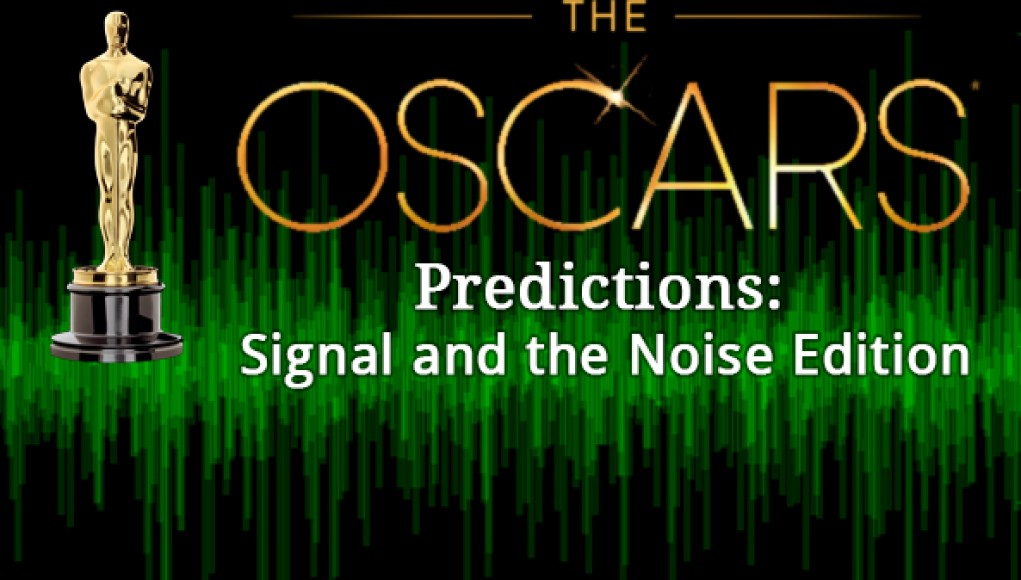 In the past few years, I have gotten rather decent at picking Oscar winners. In 2011, I was second in an Oscar pool, and had an estimated 65% success rate in 2012. This year, I have decided to take my predictions a little more seriously, thanks to the influence of Nate Silver’s The Signal and the Noise: Why So Many Predictions Fail — but Some Don’t. Silver successfully predicted the Presidential outcome in each state in 2012, and had a 98% success rate in the 2008 race.

Silver wrote his book with the intent to merge the social science of Malcolm Gladwell and the statistical analysis of Moneyball: The Art of Winning an Unfair Game, which changed baseball scouting and was the foundation to the Aaron Sorkin scripted Moneyball. The adaptation of Moneyball was released in 2011, offering an accessible account to how a low-budget baseball team can compete with the dynasties. But 2012 had Trouble with the Curve, which acted as an antithesis to Moneyball, showing that ground-level research and fundamentals are still an important aspect. But as Silver explains in The Signal and the Noise, statistical analysis is not meant to replace scouts, but provide them with research tools to assist in making an informed decision. Essentially, The Signal and the Noise is—taking a symbol from Metropolis—the heart that brings the hands and the head together. 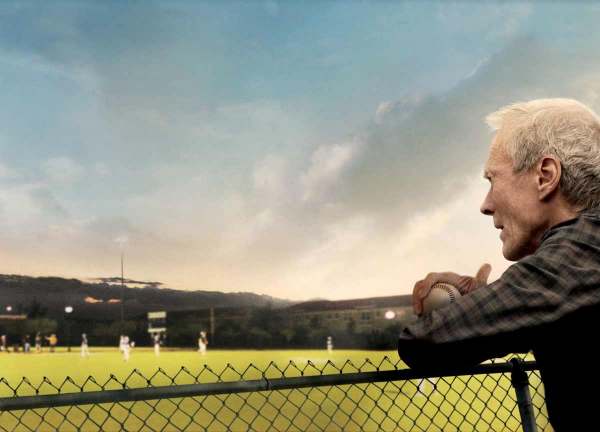 For a perfect example: In Trouble there is a lot of chatter about a popular hitter, whose statistics point towards a profitable pick. But Gus, whose sight is deteriorating, can hear that this particular hitter is unable to hit a curve ball. Even though statistics and history offer excellent signals, it is important to remember that knowledge of the entire category and each film is imperative to making a good decision. In other words, Gus heard the signal through the noise. Thus, my predictions this year will be a merger between historical statistics, popular trends, expert predictions, and informed decisions based on my critical analysis of the films and the categories they are nominated in.

Yes, Nate Silver has attempted to predict the Oscars before in 2009, and his success rate seems to be rather average.  He explains his predictions and both the success and failures by proclaiming that “one year’s worth of results is nowhere near enough to estimate the effects of this uncertainty.”

Most Oscar predictions will be relatively similar, but the way to win is to have a solid understanding of the lesser known categories. This includes Best Animated Short, Best Documentary Short, and Best Short Film. These categories have the least amount of coverage and they are the easiest to miss. Getting these three correct can help a typical ballot rise above the herd mentality.

After reading The Signal and the Noise and attempting to run my own statistical analysis, I have come to one conclusion: I should have nothing to do with statistics or math. That is why I run a film criticism website, and not FiveThirtyEight. Here I have also chosen to take this opportunity to not simply offer my obviously flawed methodology to predict the 2012 Oscars, but provide a summary of the cultural zeitgeist of 2012, which I am much better at than predictions. The Oscars is not just the capstone to the awards season for the entertainment industry, but is a collection of films that have impacted our culture the most. Of course there are snubs, but personal biases are unwelcome in awards ceremonies, unless you are voting.

The Oscars this year is nearly dominated by politically relevant, if not historical, films that represent the very best of the American spirit through atrocities and hypocrisy.

Argo explains how the CIA teamed up with Hollywood to create a fake movie production in order to help American hostages get safely out of Iran during the late 1970s. Last year, another film about American film’s attachment to history, The Artist, had dominated the Oscars most popular categories, and Argo appears to have the same momentum.

Zero Dark Thirty is a composite of how the decade-long man-hunt for Osama Bin Laden came to an end, and is a scandalous film because of the possible provision of classified information to Hollywood by the CIA. It is also a return for Director Katheryn Bigelow and scriptwriter Mark Boal whose The Hurt Locker won Best Picture, Director, and Original Screenplay. Thematically, the films share the post-9/11 war complex, but where The Hurt Locker focused solely on the anxieties of the individual soldiers, Zero Dark Thirty follows Maya, a fictionalized version of the female CIA agent who spear-headed the Bin Laden hunt.

Lincoln explains the last several months of President Abraham Lincoln’s life and his struggle to obtain enough votes for the Abolishment of Slavery during America’s most deadly war, which happened to be against itself. The film shows how dirty politics were at the time, and how the respective parties have flip-flopped in ideals. The nearly dead-locked Senate looks incredibly similar to our own times, particularly with the Health Care bill.

Beasts of the Southern Wild, while a glorious magic-realistic film, can be seen as an analog to the self-inflicted isolation of the rural areas around New Orleans and the Bayou. The atrocity of Hurricane Katrina’s wrath on the region was mis-handled long before the storm arrived, and as we know, after it had passed. Beasts depicts the staunch individualism and pride of the characters despite their impoverished community.

Django Unchained, like Lincoln, represents the ignorance behind the hatred of humans, but does so in a narrower sense and is absent of politics. Quentin Tarantino’s post-modern cinema, like usual, takes from many places to create a new narrative that is stylistics as it is vengeful. Like in Inglorious Basterds, Django is an revenge fantasy set in a contorted historical setting. Furthermore, where Basterds focused on the oppression of the Holocaust in mid-20th century Europe, Django focuses on the oppression of slavery in mid-19th century America.

So as you can see, the struggles of America are portrayed in over half of the films nominated for Best Picture this year, specifically racial tensions. Then of course there are the others which offer a diverse set of topics and style.

Les Misérables is an adaptation of the famous musical adaptation of Victor Hugo’s 19th century novel. It is an expansive—and in my opinion, exhaustive—adaptation that prides itself with having all its singing performed live during filming.

Life of Pi was considered unfilmable, with directors attached and detached for nearly a decade. Ang Lee’s approach is as magical as the novel and is indeed a technical achievement that has us considering the role of truth and myth.

Last, but certainly not least, Amour is the only foreign-language film nominated, and is the front-runner for Best Foreign Film. Michael Haneke’s film is intensely dark, focusing on the last months of an octogenarian couple’s lives. It is the darkest of the nine nominated films, and is my own personal favorite of the nine.

74% of the time, the Best Director wins Best Picture. However, this year, the film unanimously predicted to win Best Picture, Argo, is not nominated for Best Director. Golden Globes is of course an indicator as a Golden Globe winner of either the Musical/Comedy or Drama category goes on to the Oscar Best Picture 71% of the time. Les Misérables does not have the same momentum that Argo has, and the other film considered to be contender is Lincoln. Golden Globes, BAFTA, DGA, etc, all point to Argo.

Per the previous category, this shakes up the category a little bit. All the other Awards have awarded Argo director Ben Affleck as Best Director, but surprisingly, he has been left out of this year’s Oscar nominations. So, then, we need to look at other factors. The nominations are dominated by veterans, but Steven Spielberg tends to stand out. He is the popular candidate in my data, and as a film Lincoln holds much more political weight than the others. Michael Haneke’s Amour is much better, but it is far too dark to win. Steven Spielberg.

All the nominated actors performed amicably, yet Daniel Day-Lewis tends to become his character far more than others. He is a favorite in all of my data, leading with an unbreakable 99.3%. Golden Globes, BAFTA, SGA, etc, etc. Phoenix certainly deserves superlatives. Jackman’s performance is lackluster and solely bolstered by his role in a highly manipulated Les Misérables. Bradley Cooper is good, as is Washington. But neither are good enough to win.

Everything again points to Jennifer Lawrence, but there has been a shaken up as Riva, who deserves it more and won the BAFTA. This shake up is certainly perplexing, but the Oscars are not nearly as articulate as the BAFTAs.

I was annoyed by the constant singing in Les Misérables, however, Anne Hathaway’s performance is stunning and done in one take. Anne Hathaway.

The Best Picture shares one of the Screenplay awards 66.7% of the time, but that tends to favor the Adapted Screenplay. 67.86% of the time, the Golden Globes shares the one of the Oscar Screenplay categories, and that also tends to favor the Adapted category 42.86% to 25%. Django Unchained won Best Screenplay at the Globes and the BAFTAs, but my popularity data does not show that as the favored winner. I believe that we can throw out Moonrise Kingdom, Flight, and Amour, mostly because of the lack of momentum. Zero Dark Thirty.

I am gonna stick with my gut regarding the favorability of politics, and the statistics that point to the Adapted Screenplay category and its correlation to Best Picture. This leaves me with Argo and Lincoln. Argo is a better story on paper.

Pixar has won 6 of the 7 Golden Globes, and the Golden Globes shares an Animated win in 4 out of 6 times (The Golden Globes have only had the category since 2006, and the Oscars since 2001). Brave has one all the awards this year, but there are some interesting data points that put Wreck-it Ralph ahead. Regardless, both films are by Disney, which means the company wins no matter what.

Amour. War Witch (review forthcoming) was brilliant, but the momentum of Amour is unbreakable.

Paperman. Although, Adam and Dog and Maggie Simpson in The Longest Daycare are both much more concise.

Life of Pi. I have revisited all of the scores, and still suggest that Cloud Atlas was is the most deserving. Lincoln is a snorefest, Anna Karenina has a great leitmotif but Life of Pi simply has the most evocative score and leaves the best impression.

Skyfall. The song is unforgettable, with its catchy chorus reverberating in my head since its release. It is the favorite across all my data points.

Zero Dark Thirty. I still think this is a stupid category. 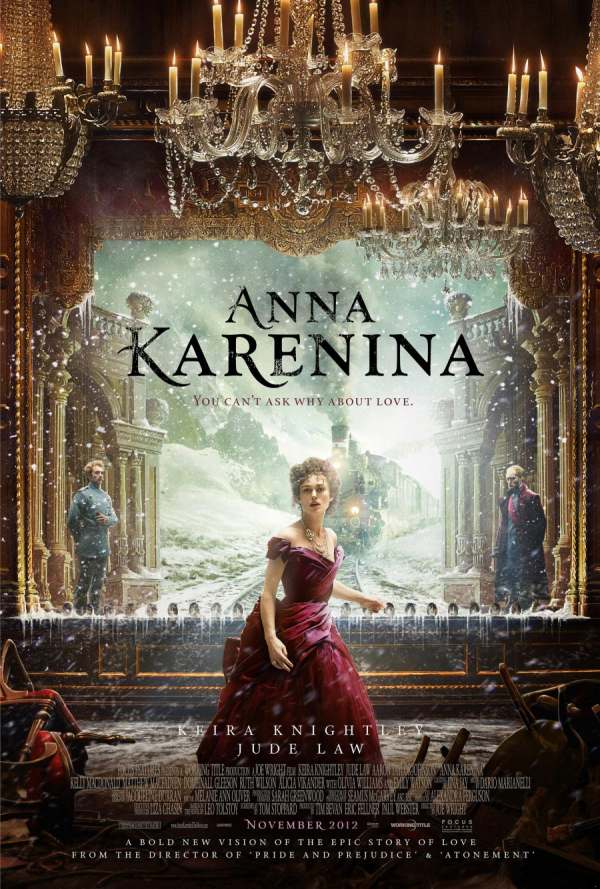 Life of Pi. This is one of the best years for cinematography. While I may not have my heart behind my prediction, it is the broadest choice, and one of the most precise.

All of the nominees are poor this year. Anthony Hopkins looked and sounded nothing like Alfred Hitchcock, and the makeup effects for Les Misérables were adequate. The Hobbit required more make up, and in categories like this, bigger is better.

Anna Karenina. The film’s time period and setting denotes an extraordinary amount of concentration on the costumes.

In the past thirty years, the Best Editor shared a win with Best picture, but that statistic takes a nose dive as you use more data. Argo has the most intense cross-cutting of the year, which is still an complex process. It also has the BAFTA.

Truly technical achievements tend to win this category, and that is exactly what how I described Life of Pi in my original review.