Home Blog 10 Notable Films From the First Half of 2013 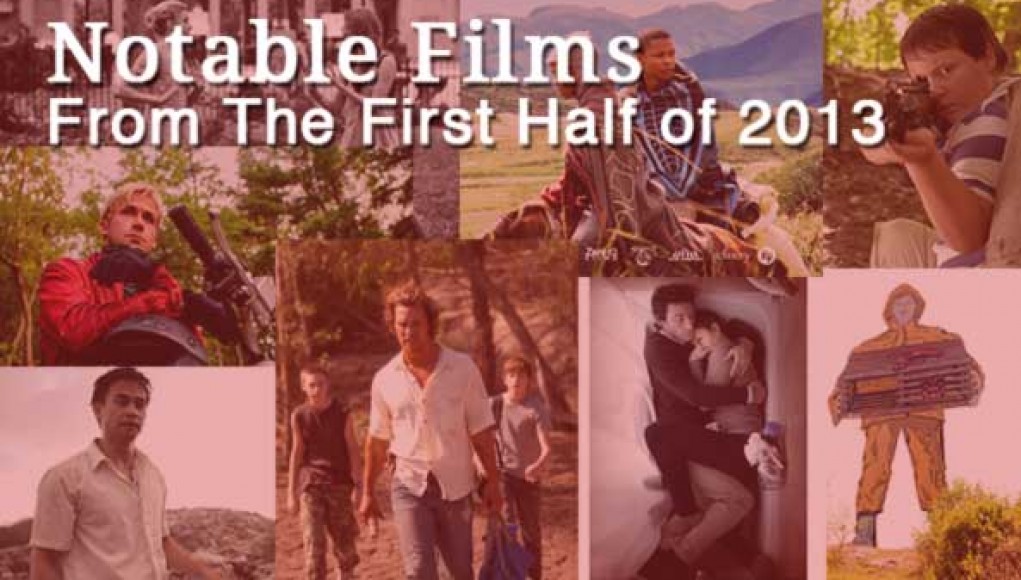 Although I’m late by nearly two months, I usually compile a list of my favorite films from the first half of the year. This list is in no particular order.

This densely packed satire about pre-teens playing capture in the flag in the woods is funny and revelatory. I Declare War portrays contemporary themes of war through the eyes of children, turning harmless wooden guns into the real thing. What is supposed to be a fun game played between school hours and dinner becomes an absurdist look at torture, drones, and espionage.

Very few filmmakers take such a long breaks between their breakout debuts and their sophomore efforts. But Shane Carruth’s Upstream Color is a momentous effort that offers a more visual form of narrative storytelling. Seemingly disparate characters find solace among another in order to deal with new sensations that have taken over their lives.

Terrance Malick returns with a follow-up effort much more quickly than usual. To The Wonder is much more visual than The Tree of Life, as Malick has refined his visual style. Although with much less dialogue than his other films, To the Wonder appears to be much more obtuse, but it is a much more tangible storyline that relies on depicting slices of life through visuals to craft a magnificent whole.

Noah Baumbach has crafted his most humorous and most introspective film to date with Frances Ha. Utilizing the Mumblecore Queen Gretta Gerwig and taking a cues from the French New Wave and the New Sincerity Movement, Frances Ha is instantly one of Baumbach’s best. Its quirky humor and relevant cultural significance of twenty-somethings has an aire of freshness despite its influences.

The Place Beyond the Pines

Three successive stories capture the legacy and predestination of two men in Schenectady, New York, while presenting the nature of absentee versus adoptive fatherhood. The Place Beyond The Pines depicts a cynical and cyclical nature of fatherhood in a small city, and the implications and consequences of their actions.

What is bound to be an American classic, Mud explores the coming-of-age of a teenager learning about the truth of love, whether it is fleeting or intangible. Influenced by Mark Twain and genuine male bonding, Director Jeff Nichols has crafted an accessible and artful tale using an ensemble cast.

When an ambitious entrepreneur arrives in a small, coastal Maine town to resurrect their failing fishing industry, his welcome is split when he procures a government grant that leaves the town on the hook if he fails. Told through a charming, hands-off cinéma vérité style, Downeast is a documentary that gorgeously captures humble residents who value small-town virtues over massive industrialization through a poetic lens.

A young man from Johannesburg returns to his village roots after the death of his father, sparking a journey across a landscape he had forgotten to regain a sense of his culture and tradition. The Forgotten Kingdom is gorgeous film that has a classicism rarely seen today. Directed by Andrew Mudge in his first feature film, The Forgotten Kingdom is an impressive debut.

Graceland  is a devastating narrative about a man vying to save his daughter from kidnappers in a highly corrupt Philippines. Relentlessly emotional and suspenseful, the film conjures feelings of sickness and desolation, but the film is never gratuitous in violence or nudity.

The Iceman depicts the real-life story of Eddie Kulinksi, a notorious contract killer who killed hundreds of men despite his family having no idea about his other life. The film conveys the main tenants of sociopaths in a palpable form: exhibiting care and compassion to his family when necessary, and a roller coaster of violence when on the job. Michael Shannon’s performance is deliberate, and a nearly unrecognizable Chris Evans provides one of his best performances.

With all these films coming out on DVD and Blu-Ray soon, I’m sure your shelf is running out of space. Get cash for your DVDs and Blu-rays with Music Magpie. It’s a free service where you can recycle your old movies and games and get money to buy new ones.